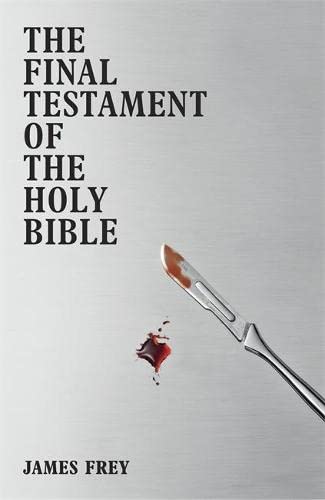 Praise for The Final Testament of the Holy Bible (- -)

Cult American author James Frey's new novel is both a work of art and a bombshell hurled at the religious right . . . This book is very good indeed. The story is told through the mouths and eyes of the Messiah's family, his girlfriends, a rabbi, a priest, a federal investigator, all contributing to a picture which is weirdly believable, often extremely moving and sometimes funny . . . Brilliant, brilliant, brilliant: every page is great. (A N Wilson, Financial Times)

Frey's execution is fab . . . a rolling, riveting headlong novel; one that packs an emotional punch yet never quite loses a little drollness about the nature of the project . . . This is a wonderful book, which one picks up with enthusiasm and puts down with reluctance. It bursts with narrative drive (Lionel Shriver, The Times)

The novel itself is compelling as both a thriller and a provocative riposte to religious orthodoxies. Fictions of this kind operate an unusual kind of suspense, in which the main tension is not what might happen but whether certain expected events still will. As a novel rather than theology, though, The Final Testament of the Holy Bible is impressively done, the alternating testimonies distinctively voiced and the twists on the gospel versions nicely judged. The repentant sinner of non-fiction proves to suit fiction (Guardian)

It's a truly brilliant book - beautiful, moving and thoughtful, yet entertaining and gripping too (Matthew Cain, Channel 4)

Exhilarating . . . It grabs you by the throat. The sheer narrative energy takes your breath away. There is an incessant, almost capricious sense of danger in his sentences - a feeling that he is not going to let you relax, that he could take you anywhere at any time . . . Frey is a fantastically persuasive storyteller and it is hard not to be moved by all these witnesses - some of them barely more than sketches, but all somewhere convincingly realised, and united by this one, life-transforming experience. Ultimately, however, Frey's biggest achievement is the character of Ben. We only ever see him through the eyes of others, yet this 'ordinary white boy' comes to seem so palpably present, so deeply alive, that the novel's final and inevitable climax feels quite brutal, like a real-life loss (Julie Myserson, New Statesman)

James Frey isn't like other writers. He's been called a liar. A cheat. A con man. He's been called a saviour. A revolutionary. A genius. He's been sued by readers. Dropped by publishers because of his controversies. Berated by TV talk-show hosts and condemned by the media. He's been exiled from America, and driven into hiding. He's also a bestselling phenomenon. Published in 38 languages, and beloved by readers around the world. What scares people about Frey is that he plays with truth; that fine line between fact and fiction. Now he has written his greatest work, his most revolutionary, his most controversial. The Final Testament of the Holy Bible.

The Final Testament of the Holy Bible. It will change you. Hurt you. Scare you. Make you think differently. Live differently. Enrage you. Offend you. Open your eyes to the world in which we live. We've waited 2,000 years for the Messiah to arrive. We've waited 2,000 years for this book to be written. He was here. The Final Testament of the Holy Bible is the story of his life.

Description du livre Hardcover. Etat : New. All orders are dispatched the same working day from our UK warehouse All items are wrapped in bubble wrap and securely packaged. We pride our selves on our customer service with 24/7 customer support . NḞ de réf. du vendeur mon0000004853

2. Final Testament of the Holy Bible

3. Final Testament of the Holy Bible

4. Final Testament of the Holy Bible