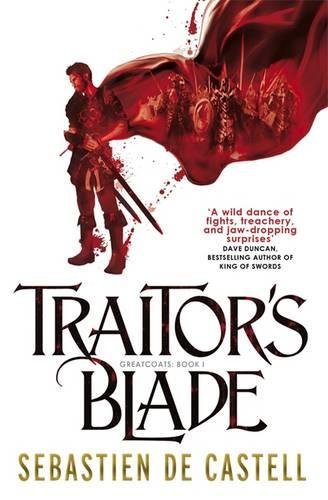 One hell of a good book (Conn Iggulden)

Fantastic from the first sentence to the last. Combining old-school swashbuckling action with contemporary characters and a good dose of grit, these books are the rarest of things, great rollicking fun combined with an emotional punch . . . Sebastien, write faster! (John Gwynne, Author of the Faithful and the Fallen)

An energetic, fun adventure that puts the "musk" back in "musketeer." Guaranteed to increase household swashbuckling by 100%. (Library Journal)

Each bloody encounter [is] described with meticulous detail . . . Traitor's Blade is the entertaining story of how the greatcoats rose and fell, and how they could rise again (SFX)

With a tip of his hat at Alexandre Dumas, Sebastien de Castell make a fine first impression in this entertaining debut . . . Traitor's Blade is a bunch of fun from one cover to the other (Tor.com)

It made me laugh out loud and it made me shed an occasional tear. It dragged me right in to the world of Tristia. Traitor's Blade is a great book and I'm already looking forward to reading the next in the series (Fantasy Faction)

Don't hesitate to buy this if you love a great hero and story . . . What a voice! What story-telling brio! If you love Dumas, or Game of Thrones or The False Prince this is the swashbuckling fantasy for you. (Amanda Craig, author of Hearts And Minds)

Traitor's Blade provides swashbuckling fan service, and has fun along the way, but it also packs a sneaky emotional punch as well. Dumas would be proud. (Pornokitsch)

The Greatcoats - legendary heroes, arbiters of justice . . . or notorious traitors?

Falcio Val Mond and his fellow Greatcoats have been trained in the fighting arts and the Laws of Tristia - they are travelling magistrates bringing justice to all, rich or poor . . . or at least they were before they stood aside as the Dukes impaled their King's head on a spike and took back the Kingdom. Now the land's heroes are disbanded and reviled as traitors, their Greatcoats in tatters.

Facio, Kest and Brasti have been reduced to working for a nobleman who refused to pay them. Things could be worse of course, Things could be worse, of course - their employer could be lying dead on the floor while the three of them are forced to watch as the killer plants evidence framing them for the murder. Oh wait, that's exactly what's happening . . .

Now, the royal conspiracy that began with overthrowing an idealistic young king is about to spread to Rijou, the most corrupt city in the land: beginning with a carefully orchestrated series of murders and the attempted murder of an orphaned girl. If it succeeds, it will be the ruin of everything that the Greatcoats have fought for, but their only tools in this deadly fight are the tattered coats on their backs and the swords in their hands. These days every noble is a tyrant, every knight is a thug, and the only thing you can really trust is a traitor's blade.