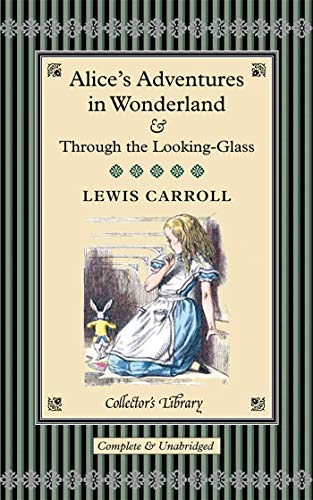 Why buy our paperbacks?

Don't buy cheap paperbacks just to save a few dollars. Most of them use low-quality papers & binding. Their pages fall off easily. Some of them even use very small font size of 6 or less to increase their profit margin. It makes their books completely unreadable.

Alice's Adventures in Wonderland (commonly shortened to Alice in Wonderland) is an 1865 novel written by English author Charles Lutwidge Dodgson under the pseudonym Lewis Carroll. It tells of a girl named Alice falling through a rabbit hole into a fantasy world populated by peculiar, anthropomorphic creatures. The tale plays with logic, giving the story lasting popularity with adults as well as with children. It is considered to be one of the best examples of the literary nonsense genre. Its narrative course and structure, characters and imagery have been enormously influential in both popular culture and literature, especially in the fantasy genre. Through the Looking-Glass, and What Alice Found There (1871) is a novel by Lewis Carroll (Charles Lutwidge Dodgson), the sequel to Alice's Adventures in Wonderland (1865). Set some six months later than the earlier book, Alice again enters a fantastical world, this time by climbing through a mirror into the world that she can see beyond it. Through the Looking-Glass includes such celebrated verses as "Jabberwocky" and "The Walrus and the Carpenter", and the episode involving Tweedledum and Tweedledee.

8. Alice's Adventures in Wonderland & Through the Looking-Glass (Collectors Library)

9. Alice's Adventures in Wonderland & Through the Looking-Glass (Collector's Library)

10. Alice's Adventures in Wonderland & Through the Looking-Glass (Collector's Library)