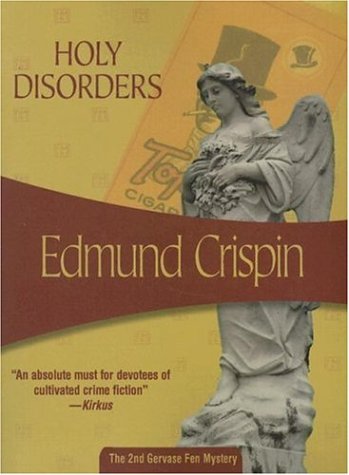 As inventive as Agatha Christie, as hilarious as P.G. Wodehouse - discover the delightful detective stories of Edmund Crispin. Crime fiction at its quirkiest and best.

Holy Disorders takes Oxford don and part time detective Gervase Fen to the town of Tolnbridge, where he is happily bounding around with a butterfly net until the cathedral organist is murdered, giving Fen the chance to play sleuth. The man didn't have an enemy in the world, and even his music was inoffensive: could he have fallen foul of a nest of German spies or of the local coven of witches, ominously rumored to have been practicing since the 17th century?

Tracking down the answer pleases Fen immensely - only the reader will have a better time.

Erudite, eccentric and entirely delightful - Before Morse, Oxford's murders were solved by Gervase Fen, the most unpredictable detective in classic crime fiction.

Edmund Crispin was the pseudonym of Bruce Montgomery, an English crime writer and composer. He graduated from St John's College, Oxford, in 1943, with a BA in modern languages, having for two years been its organist and choirmaster. From 1943 to 1945 he taught at Shrewsbury School and in 1944 published the first of nine Gervase Fen novels, The Case of the Gilded Fly. He became a well respected reviewer of crime, writing for the Sunday Times from 1967 until his death in 1978. He also composed the music for many of the Carry On films.

From the original editions: 'Edmund Crispin's recreations are swimming, excessive smoking, Shakespeare, the operas of Wagner and Strauss, idleness and cats. His antipathies are dogs, the French Film, the Renaissance of the British Film, psychoanalysis, the psychological-realistic crime story and the contemporary theatre.'