Stone, Peter H. Casino Jack and the United States of Money: Superlobbyist Jack Abramoff and the Buying of Washington

Casino Jack and the United States of Money: Superlobbyist Jack Abramoff and the Buying of Washington 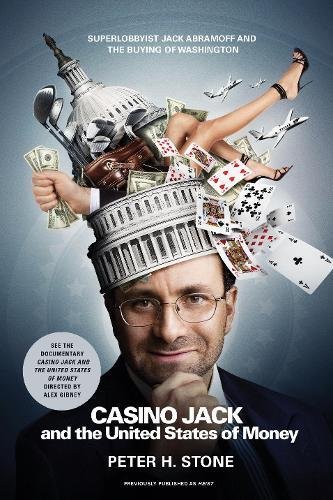 “A one-stop shop for anyone wanting to know what this scandal is all about, why the fuss has been so substantial, what made Abramoff tick and how he succeeded.”
—The New York Times Book Review

“Chillingly chronicles the sleazy and criminal exploits of one of the capital's most notorious players and exposes the darkest corners of the city.... a brilliant example of journalism noir.”
—David Corn, Washington Editor, Mother Jones

“Provides a dutifully detailed account of how Mr. Abramoff, a fervent ideologue from the Reagan era, clawed his way into the capital’s glittering skyboxes . . . especially sharp in spelling out the sucker-punch ‘Gimme Five’ plan.”
—Chris Lehmann, The New York Observer

“Lays out how a greedy nobody insinuated himself into the Republican establishment . . . timely, compact, competent, and contains all the key facts, figures, and dates.”
—Charles Trueheart, Bloomberg

“Peter Stone played a vital role in uncovering one of the biggest stories in Washington, and with this book he skillfully takes the reader deep inside the world of money, influence, politics, and power in a gripping and illuminating narrative.”
—Michael Kranish, author, Flight from Monticello: Thomas Jefferson at War

“Peter Stone’s first-rate investigative reporting, done over several years, is a deftly handled take by an experienced Washington reporter. The thing that makes this book stand out is the incredible amount of original reporting that went into it. The tale is also well written and not overly hyped. It doesn’t have to be. It is told in delicious, understated detail that could easily be turned into a movie script.”
—Anne Colamosca, co-author of The Great 401(k) Hoax

Fully Revised, with a new Epilogue
(Previously published as Heist)

A riveting tale of our time: an inside-Washington drama driven by powerful personalities and the toxic mix of money and power

An absorbing expose of lobbyist Jack Abramoff, a one time B-movie producer who worked alongside public relations whiz Michael Scanlon, an ex-aide to then House Republican whip Tom DeLay, to corrupt public officials and defraud four casino rich Indian tribes of almost $25 million. A five-year federal investigation into Abramoff’s misdeeds has turned into the largest influence peddling probe of the last decade and so far led to the convictions of twenty lobbyists, Hill staffers, Bush administration officials (including Steve Griles, the former number two at Interior) and former Representative Bob Ney (R-Ohio).

1. Casino Jack and the United States of Money: Superlobbyist Jack Abramoff and the Buying of Washington

2. Casino Jack and the United States of Money: Superlobbyist Jack Abramoff and the Buying of Washington

3. CASINO JACK AND THE UNITED STATE