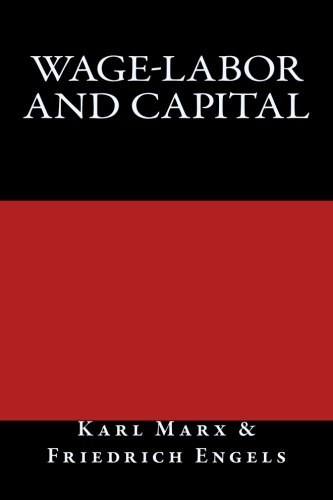 "Wage Labour and Capital" (German: "Lohnarbeit und Kapital") is an essay on economics by Karl Marx, written in 1847 and first published in articles in the Neue Rheinische Zeitung in April 1849. This essay has been widely acclaimed as the precursor to Marx’s important treatise Das Kapital.
The ideas that are expressed in the essay have a very thorough economic contemplation about them as he put aside some of his materialist conceptions of history for the time being. This essay did, however, start to show an increased scientific rationale on his ideas of "alienated labor," which in Marx’s perspective would eventually lead to the proletarian revolution.
Wage-Labor and Capital is considered by Marxists as an "in-depth economic and scientific observation on how capitalist economy works, why it was exploitative, and ultimately why it would eventually implode from within."
Some of the main topics that the essay examines are about labour power and labour, and how labour power becomes a commodity. It also presents the Labour Theory of Value that further develops the distinct differences between labour and labour power. The essay also examines the commodity and how the economic principles of supply and demand affect the pricing of certain commodities. Beyond that the essay explores how capital and capitalism do not service any purpose other than to gain more of it, which Marx presents as an illogical method of living one’s life.