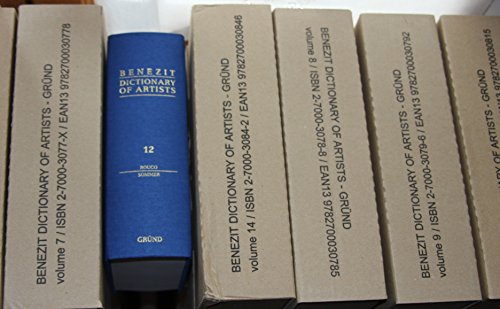 Description du livre Couverture rigide. Etat : Neuf. Etat de la jaquette : Neuf. Edition originale. Editions Gründ, Paris 2006., 2006. 61 x 36 x 30,5 cm, 20.608 pp., 14 volumen, cloth., Language : english text . The unique, in fact, "Bénézit" a chronologically arranged international dictionary of artists, since its first publication in 1911 was up today by going regularly revised and expanded as the standard and reference work for historians, dealers, collectors and students remain unmatched . In its complexity, "the Bénézit is" superior to even the Thieme / Becker or the Grove Dictionary of Arts. After he was able to succeed in the German market is difficult at first, he is staying in the English translation is now little more. It first appeared in France as "Dictionnaire critique et the Painters, sculptors, engravers Dessinateur et" in three volumes documentaire, but publication was further adjusted, given the complexity of the task. Not until the early 1920s, the project was resumed, under the leadership of Emmanuel Bénézit in the prestigious Librairie Gründ, a traditional Parisian publishing house publishing with an already highly developed at that time claim. One can say that has appeared since then about once per decade, an ever extensively expanded new edition, an editorial tour de force that occupied an entire staff of scientists and writers who worked for their immense amount of research work but thousands of documents, reviews and articles and countless public and private Archives visited. Alone for the present English edition 150 anglophone experts and translators were hired, which looked after the editorial revision, which is more of a recast. About 20,000 pages were once again completely revised and expanded by 2,000 new entries, only 3,000 of the existing entries have been written from scratch! What accounts for its unique quality, is not only the sheer number of articles - over 170,000 of all artists, sculptors, graphic artists and designers and artisans are listed, from all schools, groups and movements, from antiquity to the present day! Especially in the depth of information is "unequaled the Bénézit": each artist receives a qualified expert commentary, the basic and essential facts about provenance, signatures, monograms and stamps, a selected bibliography and provides auction information and histories. Recent research findings, for example, an extended collage, ceramics, or installation art concept is considered as well as current trends and new artists on the international art scene. The result can therefore say digitized even in our times and it still proves itself as an indispensable reference work for generations for science, commerce, museum, library and university - a more informed and more complete source is not available. Incidentally, it has deliberately decided against a digital version available and instead holds the paper version. The publication is excellent now, because we offer them a convincing special price of successes and continue its opening up to a wider audience . N° de réf. du vendeur 006963