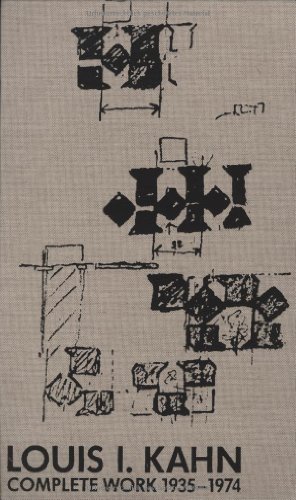 Description du livre Birkhauser, Basel & Boston, 1994. Original cloth. 2nd. Reprint of Second Revised and Enlarged Edition. Large oblong 4to. 437 pp. Includes bibliographical references and index. Illustrations; plans; drawings (most black & white, some color). Light grey linen cloth with black stamped illustration & lettering in publisher's white cardboard slipcase. Light scuffing to upper spine else a fine copy in very good to near fine slipcase. Louis I. Kahn (1901-1974) was an American architect based in Philadelphia as well as design critic and professor of architecture at Yale School of Architecture from 1947 to 1957. Kahn is considered one of the most influential architects of the twentieth century. Includes about 1700 personal and office drawings (479 more than in the first edition) in order to document the work process underlying Kahn's major projects and buildings. Sketches and plans of different developmental stages of his projects are laid out in a basically chronological order and these are complemented by relevant extracts from his writings and speeches and by his commentary while this invaluable reference works was being prepared in 1973 - the year before his death. This is a heavy volume and may require additional shipping. N░ de rÚf. du vendeur 17096

Description du livre Birkh├ ┬ñuser Basel 1987-01-01, 1987. Hardcover. Etat : Good. No Jacket. Item is in good condition. Some moderate creases and wear. This item may not come with CDs or additional parts including access codes for textbooks. This may not have a dust jacket. Might be an ex-library copy and contain writing/highlighting. Photos are stock pictures and not of the actual item. N░ de rÚf. du vendeur DS-3764313471-3