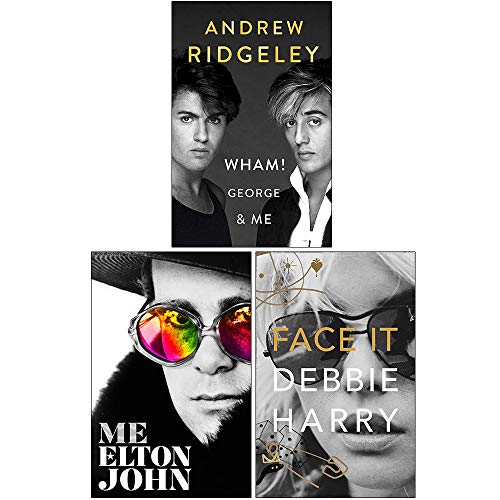 Please Note That The Following Individual Books As Per Original ISBN and Cover Image In this Listing shall be Dispatched Collectively:

Wham! George & Me:
It is 1975, Watford, and two teenagers, George and Andrew, meet for the first time. Bonding over their love for singing, song writing and pop music, together they set out to follow an impossible dream.They didn't know it then, but they were taking their first steps towards forming Wham!, a band that was to become one of the biggest in the world.

Me Elton John Official Autobiography:
Christened Reginald Dwight, he was a shy boy with Buddy Holly glasses who grew up in the London suburb of Pinner and dreamed of becoming a pop star. By the age of twenty-three, he was performing his first gig in America, facing an astonished audience in his bright yellow dungarees, a star-spangled T-shirt and boots with wings. Elton John had arrived and the music world would never be the same again.

Face It A Memoir:
DEBBIE HARRY is a musician, actor, activist and the iconic face of New York City cool. As the front-woman of Blondie, she and the band forged a new sound that brought together the worlds of rock, punk, disco, reggae and hip-hop to create some of the most beloved pop songs of all time. As a muse, she collaborated with some of the boldest artists of the past four decades. The scope of Debbie Harry's impact on our culture has been matched only by her reticence to reveal her rich inner life - until now.