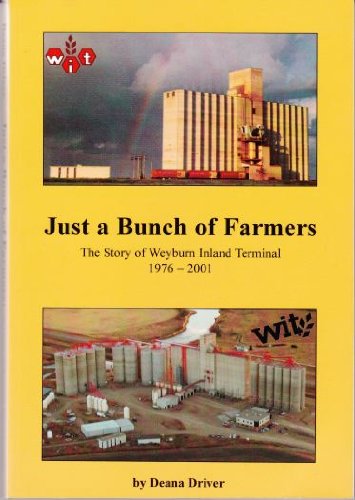 Just a Bunch of Farmers

SUBTITLED : ` The Story of Weyburn Inland Terminal 1978 - 2001 '. In Saskatchewan, the home of the co-operative movement, in 1970 Art Mainil and some of his friends began movements to bring grain handling more under the control of farmer-owners. Their concept - a large inland storage facility modelled on those they'd seen in the U.S. and those built in Canada, by the Federal government in 1918, as make-work projects. Thirty one years (and 204 pages) later they had a facility that paid shareholder dividends of $870.000 . There were a few bumps along the way !! LEARN more about : Brian Tytlandsvik, non-Boards, dockage, Paragon-Techtrol, GQA, Gladmar, Condo 1, pelleting, Amber Durhum, crop year, Estey Review, co-mingling, and the Leader-Post. cond ; Paper wrapper is goldy-yellow with black lettering. Front cover graphic is 2 colour photos - one of the original terminal and the other of the modern terminal PLUS condos. CORNERS, edges and spine are all sharp, colours bright, binding tight. Signed (2002) with a short gift inscr. on title page. no names, marks, tears, creases, folds nor bumps. Almost giftable !! Quote (p. 112) : " . Weyburn Review. the terminal announced a `dollars for dockage' plan to pay farmers $60 a tonne for dockage, the foreign material and refuse in grain, which they would then sell as livestock feed. The terminal moved from a distance-related trucking premium rate to a . .". N° de réf. du vendeur 004886

Titre : Just a Bunch of Farmers

I am a small home-based business so I may be difficult to reach by phone - there IS however an answering machine. I'm in the Mountain time zone. I've been passionate about books for approximately 25 years. Thank you for thinking Wagon Tongue.


We may accept International money orders or personal cheques; please allow 6 days for cheques to clear. Please make cheques payable to Wagon Tongue Books. I can handle your credit card transactions ONLY through the ABE.commerce program. PAYPAL is also a workable option. We under rate the condition of our books, build cardboard shipping sleeves for protected shipping and respond promptly to requests and queries. Shipping and handling on all books is at the expense of the purchaser, and is often i...


Orders usually ship within 2 business days. Shipping costs are based on books weighing less than 2.2 LB, or 1 KG. If your book order is heavy or oversized, we may contact you to let you know extra shipping is required.