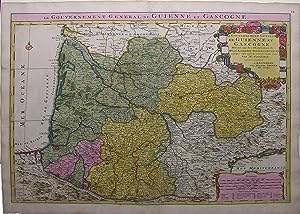 Single sheet (21 x 24 ¾ inches). Fine engraved map of the pre-Revolutionary French region of Guyenne and Gascony, surrounded by a border of yellow wash, with EXTREMELY FINE ORIGINAL HAND COLOR IN FULL, HEIGHTENED IN LIQUID GOLD, the individual regions shown in different bold watercolors of yellow, green, and pink, the title within a detailed cartouche composed of coats of arms, distance bars within a second cartouche, and decorated with a fine compass rose pointing north with a GOLD-ENHANCED FLEUR-DE-LIS (old central fold, slightly toned). An extremely fine engraved map of part of France, with original hand color in full and STRIKING LIQUID GOLD HIGHLIGHTS. The topographical features are rendered pictorially. The title appears within a brilliantly colored cartouche of the coats-of-arms of each of the provinces of the "gouvernement" of Guienne-et-Gascogne, many of which are colored with liquid gold. Additionally, important fortifications and castles are identified in red, often with a liquid gold dot. A student of the noted French cartographer, Giovanni Domenico Cassini, and the son of Claude De l'Isle, the geographer and historian to the king, Guillaume De l'Isle developed a strong basis for his cartographical skills. He produced his first terrestrial globe in 1699, and displayed a profound talent for capturing a high level of accuracy and geographical knowledge. In 1718, Louis XIV celebrated his much revered skill and accuracy by appointing him First Geographer to the French Monarchy, a title created specifically for him. In his many years in this position, De l'Isle became known for his correction of geographical errors common to his contemporaries, including dispelling the rumor of mythical lands in still-unexplored regions. N° de réf. du vendeur 72MMS268

Arader Galleries has specialized in the field of color plate books and early works on paper for over thirty years. Our main specialisms are Americana, Maps/Atlases, Voyages and Natural History (with a special focus on the works of John James Audubon). We would be delighted to answer any questions you may have about any of the books listed on ABE or to welcome you to our gallery in New York.


We guarantee your satisfaction.