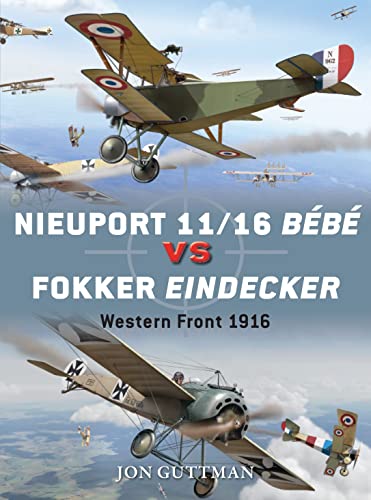 The Nieuport 11 boasts an important place in the technology race against German aircraft in World War I aerial warfare. It eventually led Nieuport to produce the first plane flown in large numbers in aerial combat by the United States.The appearance in July 1915 of Germany's Fokker E I, armed with interrupter gear that allowed its machine gun to fire forward without striking the propeller, heralded a reign of terror over the Western Front that the Allies called the "Fokker Scourge". Among several alternative means for countering the Fokkers, until the Allies introduced practical synchronisation mechanisms of their own, was the French Nieuport - 11 a single-seat version of the Nieuport 10 sesquiplane ("one-and-a-half wing") mounting a Lewis machine gun above the upper wing, firing over the airscrew. Nicknamed the Bb because of its comparatively small size, the Nieuport 11 was, though less robust than true biplanes, superior in structure and overall performance to the German monoplane. During 1916 the Nieuport 11, and its more powerful but more difficult to control stablemate, the Nieuport 16, battled a succession of improved Fokkers, the E II, E III and E IV, until the Germans abandoned the monoplane in favour of a new and deadly generation of biplane fighters. Even so, the Bb's early successes also influenced the Germans to adopt sesquiplane designs of their own - most notably the Albatros D III and D V - while Nieuport also held on to the sesquiplane format longer than it should have. Fully illustrated with specially commissioned full-colour artwork, this is the absorbing story of the clash between these two innovative fighters at the height of World War I.

Jon Guttman, a resident of Leesburg, Virginia, is currently research editor for Weider History Publications. Specializing in World War I aviation, he has written many titles for Osprey including the popular Aircraft of the Aces 66: Balloon-Busting Aces of World War I. The author lives in Leesburg, VA.


We guarantee the condition of every book as it's described on the Abebooks web sites. If you're dissatisfied with your purchase (Incorrect Book/Not as Described/Damaged) or if the order hasn't arrived, you're eligible for a refund within 30 days of the estimated delivery date. If you've changed your mind about a book that you've ordered, please contact us immediately at 313-445-6282 or send a fax to 313-441-9010.