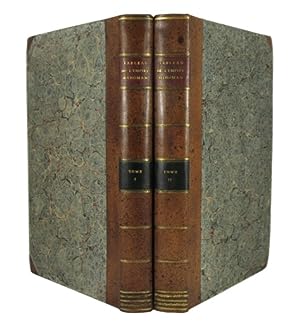 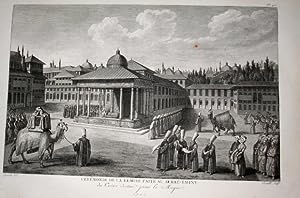 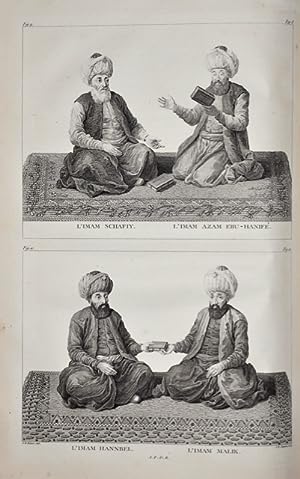 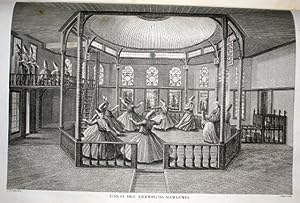 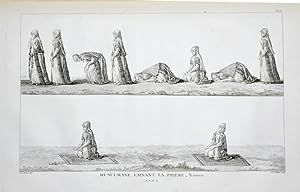 Large folio. The first two volumes: Pp. (vi), xii, 320, (8) with extra engraved title, four tables (A, AA, B and C) and 24 engraved plates illustrating 38 figures; pp. (iv), viii, 357 with 41 engraved plates depicting two tables and 95 figures. As usual figures 13 and 19 (volume one) are not present because these images were printed later and consequently delivered after the publication of the book. Several of the plates are double page. Contemporary half calf (Swedish binding), expertly rebacked to style. Provenance: Josť Moreno Landaburo Daoiz with his signature on front paste downs, Spanish diplomat in Stockholm, married to Amelie (Amalia) who was the daughter of Nils Gustaf Palin (1765-1842) and Mouradgea D?Ohsson?s daughter Claire-Lucie. Palin was a Swedish diplomat who served in Constantinople at the end of the 19th century and again 1806-24. Later this book has belonged to the Hammer library and H.J. Lundgren (with bookplates). The third volume: pp. (iv), 128, 133-281; (9v), pp. 283-474, table (8). Text complete but without the plates. Contemporary marbled boards, calf spine with title lettered in gold, lightly rubbed. Library stamps.First edition of this monumental work on the Ottoman empire printed by the renowned French typographer Pierre-FranÁois Didot, and illustrated by the foremost French artists of the time. D'Ohsson was an Armenian dragoman, born in Pera and for many years in the service of the Swedish embassy in Constantinople. He was ennobled in 1780 by the Swedish king Gustav III and D'Ohsson gratefully dedicated his work to the monarch. After his death a third volume was completed by his son in 1820. D'Ohsson's work is devoted to the Ottoman history, Muslim practices and contemporary life including information about dress, architecture and cooking. It's praised because of it's authenticity and the truthful images. The impressive illustrations are derived from paintings made in Istanbul, either copies of earlier works (imperial portraits or illuminated manuscripts) or original works. Through D'Ohsson's connections with the court hierarchy he had access to official annals and was able to get drawings of the interiors of libraries, mosques, chapels, etc. Atabey 846. Blackmer 1164. See: Elisabeth Fraser "Dressing Turks in the French Manner", Ars Orientalis 39, Smithsonian Inst. 2010, pp. 199-229. "Writing in a fraught political context following the Russian defeat of the Ottomans, Ohsson forthrightly cast his publication as a defense of Islam and the Ottoman Empire. More than a textual apology, his illustrated book embodies a supreme act of cultural crossing." (Fraser, "Dressing Turks in the French Manner"). Nį de rťf. du libraire 100683


All items are offered subject to previous sale. All books are complete,
octavo in size and in good condition, unless otherwise stated. Prices are
in Euro; packing, postage and insurance are extra. Payment is to be made
by Visa/MasterCard or by direct bank transfer. New customers are
requested to remit payment upon receipt of a pro forma invoice prior to
shipment. Books may be returned within fourteen days of receipt after our
confirmation. Safe return shipment is the buyer's responsibility. All
...