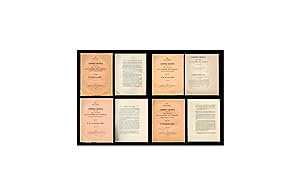 FOUR FIRST EDITIONS IN ORIGINAL WRAPS OF LIPPMANN'S MILESTONE SERIES OF PAPERS DESCRIBING HIS NOBEL PRIZE WINNING INVENTION OF "A METHOD OF REPRODUCING COLORS PHOTOGRAPHICALLY BASED ON THE PHENOMENON OF INTERFERENCE" Nobel Prize Committee). Lippmann's prize represents the only time this prestigious award has been given for a photographic invention. Gabriel Jonas Lippmann was a French scientist and a professor of mathematical physics at the Sorbonne. In the first paper offered here (February 2, 1891) Lippmann announced to the Academy of Sciences in Paris that he had succeeded in recording a true-color spectrum which was permanent. To do so, he employs the 'interference principle' - a method based on silver chloride's optical reaction to light waves). A little more than one year later, on April 25, 1892 (offered here in the second paper), Lippmann gave a second presentation at the Academy of Sciences. This time he displayed four color photographs of different objects" - specifically, he had succeeded in producing colour images of a stained glass window, a group of flags, a bowl of oranges topped by a red poppy and a multicolored parrot. (Hannavy, Ency of 19th c. Photography, 862). In the third paper offered (October 24, 1892), Lippmann presented the first colored photographs of the spectrum on albumen and bichromated gelatin. Here Lippmann took "albumenized and gelatinized plates soaked in bichromate of potash may be employed for photographing in colors" (Nature 47, 1201, 1892, 23). "They are used like silver-salt plates, being placed so that the mercury is in contact with the film. The colors will appear immediately after immersion in water, which develops and also fixes the image. It disappears on drying, but reappears as soon as the plate is soaked. The colors are very brilliant and visible at all angles. Those of gelatin plates are brought out by simple breathing. The theory is analogous to that of silver plates, the maxima and minima of interference producing hygroscopic and non-hygroscopic layers with varying refractive indices" (ibid). In the fourth paper offered (January 15, 1894), Lippmann put fourth his theory of photography simple colors and composed by the interferometric method". 1894 is "the first proper theory of the recording of monochromatic and polychromatic spectra. He applied Fourier mathematics to optics, which was a new approach at that time. To record a more complex wave front, such as a landscape scene in natural colors, Lippmann introduced Fourier mathematics to show how such a recording could be theoretically described" (Bjelkhagen, Ultra-Realistic Imaging, 43). Despite many difficulties with the process and the complexity of its use, Lippmann's methodology "remains, to this day, the only direct process of true colour photography known. It is a technique of exquisite beauty, both technically and aesthetically. The ultra- fine grain plates, essential to the medium, display the highest photographic resolution ever achieved. The encoding of colour, as a periodic volume diffraction grating of pure silver offers excellent and unrivaled archival longevity" (Bjelkhagen, Lippmann Colour Photography, Alternative Photography). CONDITION & DETAILS: Paris: Gauthier-Villars. 4 complete issues, all in original paper wraps. 4to (11.25 x 9 inches; 281 x 225mm). Comptes Rendus in paper wraps are rarely present as the wrap paper (not interior paper) is particularly fragile; it is quite unusual for all issues to have their wraps. The wraps are bound in string with the spines going but the stitching holding; otherwise clean. The April 25, 1892 issue shows signs of old staining (happily absent any mustiness) on the wrappers plus a short closed tear at the foot of the front wrap. The staining is contained to the wrap and did not advance to the interior text. The first, third and fourth issues have slight creasing but are in very good condition. N° de réf. du libraire 728