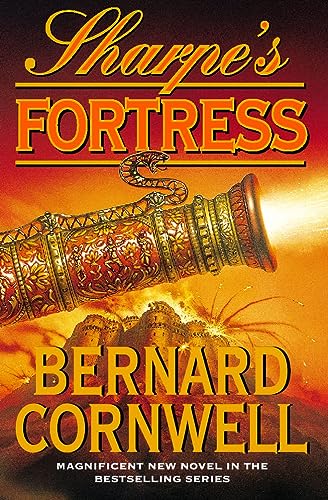 Surviving the infamous battle of Assaye, Richard Sharpe has been promoted for his gallantry and skill assisting Sir Arthur Wellesley--the future Duke of Wellington--in overcoming the rebellious Mahratta confederation. But though the war with the Mahratta seems near its end, Sharpe, now an officer in Wellesley's army, faces a battle of a different kind among his own ranks. Uncomfortable with his newfound authority and unwelcoming colleagues, Sharpe is relegated to the tedium of baggage duty.

But his fury and uncertainty are soon overcome when he catches wind of a treasonous scheme devised by none other than his oldest and worst enemy, Sergeant Obadiah Hakeswill. His life hanging in the balance and no friend to turn to, Sharpe has little choice but to take up arms and seek revenge in a desperate attempt to thwart his old nemesis and regain his stolen treasure, the jewels of the Tippoo Sultan.

Sharpe's private campaign leads him to the legendary impenetrable fortress in the sky, Gawilghur--the last refuge for desperate enemies of all dark stripes, including the renegade Englishman William Dodd. Joining Wellesley's army as it prepares to lay siege to this fortress high above the Deccan Plain, Sharpe will risk his honor, reputation, and fortune on a battle that will test him as never before.

Sharpe's Fortress caps this unforgettable soldier's India trilogy and leaves him poised to return to Europe, where he will face new, even more evil and lethal enemies.

Bernard Cornwell's masterful characters and sweeping historical novels provide "a marvelous mixture of fact and fiction" that are "characterized by . . . immaculate historical reconstruction and the ability to tell a ripping yarn." For adventure fans everywhere, they are not to be missed.