Articles liés ŕ The Prospect Before Her: History of Women in Western...

Hufton, Olwen H. The Prospect Before Her: History of Women in Western Europe, 1500-1800

The Prospect Before Her: History of Women in Western Europe, 1500-1800 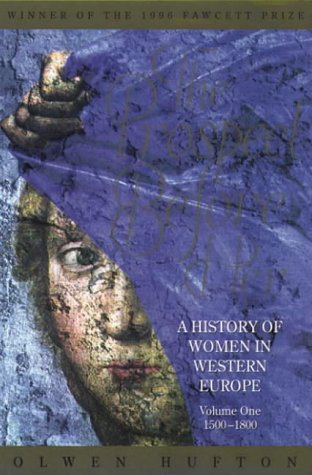 Description du livre HARPERCOLLINS PUBLISHERS LTD, 1995. Etat : Fair. This book has hardback covers. Ex-library, With usual stamps and markings, In fair condition, suitable as a study copy. No dust jacket. Please note the Image in this listing is a stock photo and may not match the covers of the actual item,1350grams, ISBN:0002551209. N° de réf. du vendeur 3643565

Description du livre HarperCollins 19/10/1995, 1995. Etat : Very Good. This book is in very good condition and will be shipped within 24 hours of ordering. The cover may have some limited signs of wear but the pages are clean, intact and the spine remains undamaged. This book has clearly been well maintained and looked after thus far. Money back guarantee if you are not satisfied. See all our books here, order more than 1 book and get discounted shipping. . N° de réf. du vendeur 7719-9780002551205

Description du livre HarperCollins, 1995. Hardback. Etat : Very Good. The book has been read, but is in excellent condition. Pages are intact and not marred by notes or highlighting. The spine remains undamaged. N° de réf. du vendeur GOR001145192

Description du livre HarperCollins Publishers, United Kingdom, London, 1995. Paperback. Etat : Good. This book brings together a mass of detailed and dispersed material on women in early modern Europe, as well as giving readers a new interpretation of the considerable study of women which has emerged over the list two decades. The author's range is ambitious and, unlike previous works in the field which isolate particular aspects of the lives of women or of the versions of woman, she considers the situation of all kinds of women, all aspects of their lives, across the whole of Western Europe, particularly England and France, and over three centuries. The book's approach is thematic with chapters on female rites of passage - girlhood marriage, married life as well as norms, sexuality, witches and saints. The book has been read but remains in clean condition. All pages are intact and the cover is intact. Some minor wear to the spine. N° de réf. du vendeur GOR003287773