Articles liés ŕ The Bounty: The True Story of the Mutiny on the Bounty

Alexander, Caroline The Bounty: The True Story of the Mutiny on the Bounty

The Bounty: The True Story of the Mutiny on the Bounty 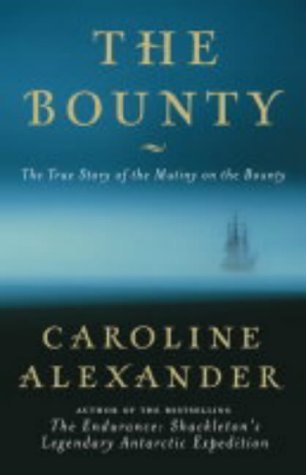 The Bounty: The True Story of the Mutiny on the Bounty

His small vessel pitching in the squally winter sea, a young British naval lieutenant waited restlessly to embark upon the most important and daunting voyage of his still young but highly promising career. William Bligh, aged thirty-three, had been selected by His Majesty's government to collect breadfruit plants from the South Pacific island of Tahiti and to transport them to the plantations of the West Indies. Like most of the Pacific, Tahiti—Otaheite—was little known; in all the centuries of maritime travel, fewer than a dozen European ships had anchored in her waters. Bligh himself had been on one of these early voyages, ten years previously, when he had sailed under the command of the great Captain Cook. Now he was to lead his own expedition in a single small vessel called Bounty.

With his ship mustered and provisioned for eighteen months, Bligh had anxiously been awaiting the Admiralty's final orders, which would allow him to sail, since his arrival at Spithead in early November. A journey of some sixteen thousand miles lay ahead, including a passage around Cape Horn, some of the most tempestuous sailing in the world. Any further delay, Bligh knew, would ensure that he approached the Horn at the height of its worst weather. By the time the orders arrived in late November, the weather at Spithead itself had also deteriorated to the extent that Bligh had been able to advance no farther than the Isle of Wight, from where he wrote a frustrated letter to his uncle-in-law and mentor, Duncan Campbell.

"If there is any punishment that ought to be inflicted on a set of Men for neglect I am sure it ought on the Admiralty," he wrote irascibly on December 10, 1787, "for my three weeks detention at this place during a fine fair wind which carried all outward bound ships clear of the channel but me, who wanted it most."

Nearly two weeks later, he had retreated back to Spithead, still riding out bad weather.

"It is impossible to say what may be the result," Bligh wrote to Campbell, his anxiety mounting. "I shall endeavor to get round [the Horn]; but with heavy Gales, should it be accompanied with sleet & snow my people will not be able to stand it....Indeed I feel my voyage a very arduous one, and have only to hope in return that whatever the event may be my poor little Family may be provided for. I have this comfort," he continued with some complacency, "that my health is good and I know of nothing that can scarce happen but I have some resource for— My little Ship is in the best of order and my Men & officers all good & feel happy under my directions."

At last, on December 23, 1787, the Bounty departed England and after a rough passage arrived at Santa Cruz, in Tenerife. Here, fresh provisions were acquired and repairs made, for the ship had been mauled by severe storms.

"The first sea that struck us carryed away all my spare yards and some spars," Bligh reported, writing again to Campbell; "—the second broke the Boats chocks & stove them & I was buryed in the Sea with my poor little crew...."

Despite the exasperating delay of his departure, the tumultuous passage and the untold miles that still lay ahead, Bligh's spirits were now high—manifestly higher than when he had first set out. On February 17, 1788, off Tenerife, he took advantage of a passing British whaler, the Queen of London, to drop a line to Sir Joseph Banks, his patron and the man most responsible for the breadfruit venture.

"I am happy and satisfyed in my little Ship and we are now fit to go round half a score of worlds," Bligh wrote, "both Men & Officers tractable and well disposed & cheerfulness & content in the countenance of every one. I am sure nothing is even more conducive to health. —I have no cause to inflict punishments for I have no offenders and every thing turns out to my most sanguine expectations."

"My Officers and Young Gentlemen are all tractable and well disposed," he continued in the same vein to Campbell, "and we now understand each other so well that we shall remain so the whole voyage...."

Bligh fully expected these to be his last communications on the outward voyage. But monstrous weather off Cape Horn surpassed even his worst expectations. After battling contrary storms and gales for a full month, he conceded defeat and reversed his course for the Cape of Good Hope. He would approach Tahiti by way of the Indian Ocean and Van Diemen's Land (now Tasmania), a detour that would add well over ten thousand miles to his original voyage.

"I arrived here yesterday," he wrote to Campbell on May 25 from the southernmost tip of Africa, "after experiencing the worst of weather off Cape Horn for 30 Days....I thought I had seen the worst of every thing that could be met with at Sea, yet I have never seen such violent winds or such mountainous Seas." A Dutch ship, he could not resist adding, had also arrived at the Cape with thirty men having died on board and many more gravely ill; Bligh had brought his entire company through, safe and sound.

The Bounty passed a month at the Cape recovering, and was ready to sail at the end of June. A still arduous journey lay ahead but Bligh's confidence was now much greater than when he had embarked; indeed, in this respect he had shown himself to be the ideal commander, one whose courage, spirits and enthusiasm were rallied, not daunted, by difficulties and delays. Along with his ship and men, he had weathered the worst travails he could reasonably expect to face.

The long-anticipated silence followed; but when over a year later it was suddenly broken, Bligh's correspondence came not from the Cape, nor any other port of call on the expected route home, but from Coupang (Kupang) in the Dutch East Indies. The news he reported in letters to Duncan Campbell, to Joseph Banks and above all to his wife, Elizabeth, was so wholly unexpected, so unconnected to the stream of determined and complacent letters of the year before as to be almost incomprehensible.

"My Dear Dear Betsy," Bligh wrote with palpable exhaustion to his wife on August 19, 1789, "I am now in a part of the world that I never expected, it is however a place that has afforded me relief and saved my life....

"Know then my own Dear Betsy, I have lost the Bounty...."

More than two centuries after Master’s Mate Fletcher Christian led a mutiny against Lieutenant William Bligh on a small, armed transport vessel called Bounty, the true story of this enthralling adventure has become obscured by the legend. Combining vivid characterization and deft storytelling, Caroline Alexander shatters the centuries-old myths surrounding this story. She brilliantly shows how, in a desperate attempt to save one man from the gallows and another from ignominy, two powerful families came together and began to create the version of history we know today. The true story of the mutiny on the Bounty is an epic of duty and heroism, pride and power, and the assassination of a brave man’s honor at the dawn of the Romantic age.

1. The Bounty: The True Story of the Mutiny on the Bounty [Hardcover] Alexander, Caroline