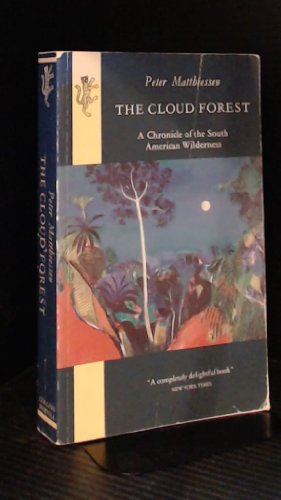 Peter Mattiessen has long been known for his travels to some of the remotest lands on earth, most notably recorded in The Snow Leopard. The Cloud Forest brings to vivid life a South American journey that took him from the Sargasso Sea to the jungles of Amazonia, from the Inca city of Machu Picchu high in the Andes to the bleak rocks of Tierra del Fuego and the winds and vast skies of Patagonia.

The result is an incisive and marvellously well-observed journal by a born writer and naturalist, a voyage of exploration among the people, places and fading wildlife of this most exotic and mysterious of continents.

"[A] passionately observed and argued blend of natural history, ethnography, philosophy and mysticism written in a style for which the closest comparison is that of Joseph Conrad" (Independent)

"A completely delightful book... An extraordinary perception... Nowhere in The Cloud Forest did I come across a false note" (New York Times)

"His book deserves as long as life as the records of such earlier naturalists as Darwin, Bates and Hudson" (New York Herald Tribune)

Description du livre Paperback. Etat : Good. All orders are dispatched the following working day from our UK warehouse. Established in 2004, we have over 500,000 books in stock. No quibble refund if not completely satisfied. N° de réf. du vendeur mon0003793368

Description du livre Paperback. Etat : Very Good. The book has been read, but is in excellent condition. Pages are intact and not marred by notes or highlighting. The spine remains undamaged. N° de réf. du vendeur GOR003662752

Description du livre Etat : Good. A+ Customer service! Satisfaction Guaranteed! Book is in Used-Good condition. Pages and cover are clean and intact. Used items may not include supplementary materials such as CDs or access codes. May show signs of minor shelf wear and contain limited notes and highlighting. N° de réf. du vendeur 0002721260-2-4

Description du livre Etat : Very Good. Shipped within 24 hours from our UK warehouse. Clean, undamaged book with no damage to pages and minimal wear to the cover. Spine still tight, in very good condition. Remember if you are not happy, you are covered by our 100% money back guarantee. N° de réf. du vendeur 6545-9780002721264

Description du livre Etat : Very Good. This book is in very good condition and will be shipped within 24 hours of ordering. The cover may have some limited signs of wear but the pages are clean, intact and the spine remains undamaged. This book has clearly been well maintained and looked after thus far. Money back guarantee if you are not satisfied. See all our books here, order more than 1 book and get discounted shipping. . N° de réf. du vendeur 7719-9780002721264