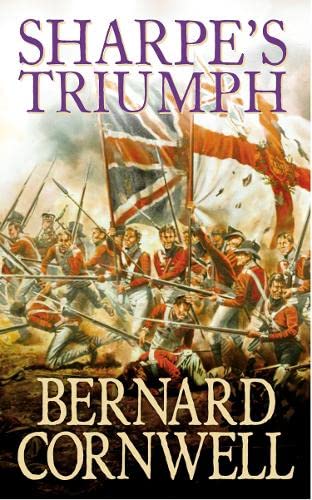 Critically acclaimed, perennial New York Times bestselling author Bernard Cornwell (Agincourt, The Fort, the Saxon Tales) makes real history come alive in his breathtaking historical fiction. Praised as "the direct heir to Patrick O'Brian" (Agincourt, The Fort), Cornwell has brilliantly captured the fury, chaos, and excitement of battle as few writers have ever done—perhaps most vividly in his phenomenally popular novels following the illustrious military career of British Army officer Richard Sharpe during the late 18th and early 19th centuries. In Sharpe's Triumph, Sharpe's hunt for a traitorous renegade British officer leads the courageous young sergeant straight into the fires and madness of India's Battle of Assaye in September 1803. Perhaps the San Francisco Chronicle said it best: "If only all history lessons could be as vibrant."

Sergeant Richard Sharpe is the sole survivor of a murderous attack led by Major William Dodd, a cold-blooded English turncoat fighting for the mercenary forces of the Mahratta confederation. Determined to avenge the deaths of his comrades, Sharpe pursues the traitor deep into the heart of enemy territory, joining the army of Sir Arthur Wellesley, the future Duke of Wellington, in the village of Assaye. For Sharpe will have his satisfaction as, outmanned and outgunned, he and Wellesley's men take on the ruthless Mahratta horde, charging courageously into the white heat of one of the greatest battles of its century.