The Last Playboy: The High Life of Porfirio Rubirosa 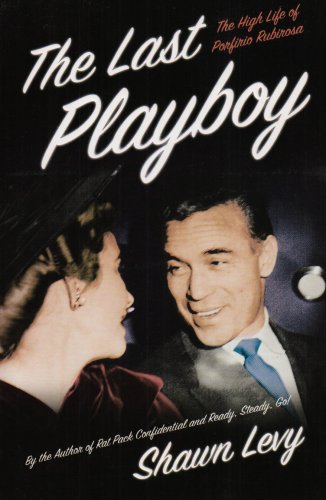 “Fascinating . . . A compulsive read. Shawn Levy is one of our best popular culture journalist-historians.” (Lewis MacAdams, author of Birth of the Cool: Beat, Bebop and the American Avant Garde)

“Levy goes beyond the glitz to see Rubirosa as a product of a particular time and place...a perfect tribute.” (Publishers Weekly)

“A terrific story about a fascinating character.” (John Malkovich)

“Shawn Levy has written more than a good book—this is an irresistible read. Hollywood will soon come knocking.” (Douglas Brinkley, Professor of History and Director of the Roosevelt Center at Rulane University)

“A fitting elegy for a forgotten boldfaced name and a thoughtful study of mid-20th-century Pan-American politics.” (Entertainment Weekly)

At one gilded moment in history, his fame was so great that he was known the world over by his nickname alone: Rubi. Pop songs were written about him. Women whom he had never met offered to leave their husbands for him. He had an eye for feminine beauty, particularly when it came with great wealth: Barbara Hutton, Doris Duke, Eva Perón, and Zsa Zsa Gabor. But he was a man's man as well, polo player and race-car driver, chumming around with the likes of Joe Kennedy, Frank Sinatra, Oleg Cassini, Aly Khan, and King Farouk. He was also a jewel thief, and an intimate of one of the world's most bloodthirsty dictators. And when he died at the age of fifty-six—wrapping his sports car around a tree in the Bois de Boulogne—a glamorous era of white dinner jackets at El Morocco and celebrity for its own sake died along with him.

He was one of a kind, the last of his breed. And in The Last Playboy, author Shawn Levy brings the giddy, hedonistic, and utterly remarkable story of Porfirio Rubirosa to glorious Technicolor life.

1. The Last Playboy: The High Life of Porfirio Rubirosa

Description du livre Fourth Estate, 2005. Paperback. Etat : Good. All orders are dispatched the following working day from our UK warehouse. Established in 2004, we have over 500,000 books in stock. No quibble refund if not completely satisfied. Nį de rťf. du vendeur mon0003793866

2. The Last Playboy: The High Life of Porfirio Rubirosa

Description du livre Paperback. Etat : Very Good. The book has been read, but is in excellent condition. Pages are intact and not marred by notes or highlighting. The spine remains undamaged. Nį de rťf. du vendeur GOR001137393

3. The Last Playboy: The High Life of Porfirio Rubirosa

Description du livre Paperback. Etat : Good. The book has been read but remains in clean condition. All pages are intact and the cover is intact. Some minor wear to the spine. Nį de rťf. du vendeur GOR001304073

4. The Last Playboy: The High Life of Porfirio Rubirosa

Description du livre -. Paperback. Etat : Very Good. The Last Playboy: The High Life of Porfirio Rubirosa This book is in very good condition and will be shipped within 24 hours of ordering. The cover may have some limited signs of wear but the pages are clean, intact and the spine remains undamaged. This book has clearly been well maintained and looked after thus far. Money back guarantee if you are not satisfied. See all our books here, order more than 1 book and get discounted shipping. Nį de rťf. du vendeur 7719-9780007171064

5. THE LAST PLAYBOY, THE HIGH LIFE OF PROFIRIO RUBIROSA