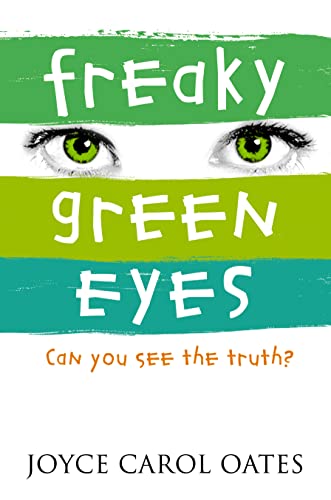 Joyce Carol Oates is a recipient of the National Medal of Humanities, the National Book Critics Circle Ivan Sandrof Lifetime Achievement Award, the Chicago Tribune Lifetime Achievement Award, the National Book Award, and the PEN/Malamud Award for Excellence in Short Fiction, and has been nominated for the Pulitzer Prize. She has written some of the most enduring fiction of our time, including the national bestsellers We Were the Mulvaneys; Blonde, which was nominated for the National Book Award; and the New York Times bestseller The Accursed. She is the Roger S. Berlind Distinguished Professor of the Humanities at Princeton University and has been a member of the American Academy of Arts and Letters since 1978.

It began with me a year ago this past July. A few weeks after my fourteenth birthday. When Freaky Green Eyes came into my heart.

When her parents separate, Franky Pierson has no trouble deciding whose side she's on. After all, her mother is the one who chose to leave. And when her mother is suddenly reported missing, Franky believes she's simply pulled a disappearing act and deserted their family for good. But a part of Franky, a part she calls Freaky Green Eyes, knows that something is wrong. And it's up to Freaky to open Franky's eyes to the truth.

Description du livre HarperCollins Publishers, United Kingdom, 2004. Paperback. Etat : New. Language: English. Brand new Book. New novel from the bestselling author of BIG MOUTH AND UGLY GIRL. To the outside world, Franky Pierson is a lucky girl with a charmed life. With a celebrity dad - TV sports commentator, Reid Pierson - and beautiful artist mother, living in a state-of-the-art designer home and wanting for nothing, their world could be described as perfect. And Franky could almost believe this is true - after all, her father keeps on telling her that it is and she would never disagree with him. But in that case, why does is her mother spending time away from home? And how come her step-brother is barely speaking, and her little sister won't stop whining? Why are they all provoking dad in this way? Freaky Green Eyes knows the answers. Freaky Green Eyes is Franky's inner self. Only she dares to look at Franky's life and dare to suggest that all is not as it should be in the Pierson household. But is she strong enough to do anything about it - before something really terrible happens? A really compelling and eye-opening novel that keeps you turning pages from beginning to end. N° de réf. du vendeur AAZ9780007183142

4. Freaky Green Eyes: Can you see the truth?

5. Freaky Green Eyes: Can you see the truth?

8. Freaky Green Eyes: Can you see the truth?