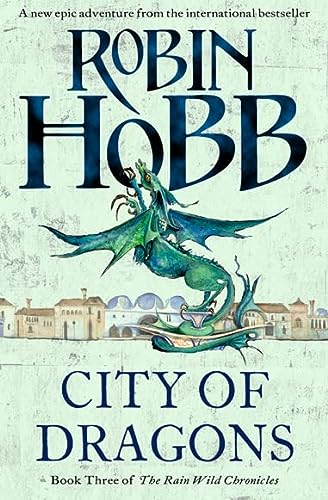 “Hobb creates a completely alluring portrait of dragons and their culture.” (Bellingham Herald on DRAGON HAVEN)

“Hobb has a deft hand with accessible and sympathetic characters, regardless of their fantasy trappings, and he makes effective use of the divide between what the reader knows and what the characters know to build tension....A quick and fun read.” (Miami Herald on DRAGON HAVEN)

“Hobb’s strength has always been her ability to create compelling characters to inhabit her richly detailed worlds. The Rain Wilds Chronicles is no exception.” (Shroud Magazine Book Reviews on DRAGON KEEPER and DRAGON HAVEN)

“In a novel as good as it is massive, the first of two Rain Wilds Chronicles...Hobb continues to occupy a perch at or near the top among contemporary fantasists. This book is imaginative, literate, and compassionate from first page to last.” (Booklist (starred review))

“A satisfying story” (The News-Star (Monroe, LA) on DRAGON HAVEN)

“The Soldier Son [trilogy] can be read as a political satire on American military aggression, but on a more personal level it is profoundly perceptive about the challenge faced by the honorable, brave and good. Nevarre is a true hero.” (London Times)

“[W]e suspend disbelief with complete abandon as the pages turn and turn...Robin Hobb is one of the most important writers in 21st century fantasy.” (Contra Costa Times on RENEGADE'S MAGIC)

New York Times bestselling author Robin Hobb returns to world of the Rain Wilds—called “one of the most gripping settings in modern fantasy” (Booklist)—in City of Dragons. Continuing the enthralling journey she began in her acclaimed Dragon Keeper and Dragon Haven, Hobb rejoins a small group of weak, half-formed and unwanted dragons and their displaced human companions as they search for a legendary sanctuary. Now, as the misfit band approaches its final destination, dragons and keepers alike face a challenge so insurmountable that it threatens to render their long, difficult odyssey utterly meaningless. Touching, powerful, and dazzlingly inventive, Hobb’s City of Dragons is not to be missed—further proof that this author belongs alongside Raymond E. Feist, Terry Brooks, and Lois McMaster Bujold in the pantheon of fantasy fiction’s true greats.

Description du livre Paperback. Etat : Very Good. The book has been read, but is in excellent condition. Pages are intact and not marred by notes or highlighting. The spine remains undamaged. NḞ de réf. du vendeur GOR004729622

Description du livre Paperback. Etat : Good. The book has been read but remains in clean condition. All pages are intact and the cover is intact. Some minor wear to the spine. NḞ de réf. du vendeur GOR005326382

Description du livre Paperback. Etat : Very Good. All orders are dispatched the following working day from our UK warehouse. Established in 2004, we have over 500,000 books in stock. No quibble refund if not completely satisfied. NḞ de réf. du vendeur mon0004526224