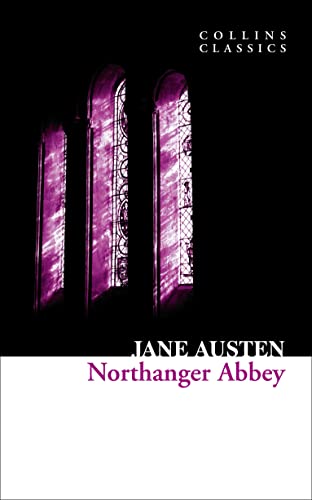 'Jane Austen is the pinnacle to which all other authors aspire' J. K. Rowling

Catherine Morland is a young girl with a very active imagination. Her naivety and love of sensational novels lead her to approach the fashionable social scene in Bath and her stay at nearby Northanger Abbey with preconceptions that have embarrassing and entertaining consequences.

Description du livre Paperback. Etat : New. UK ed. Language: English. Brand new Book. HarperCollins is proud to present its range of best-loved, essential classics. 'Northanger Abbey! These were thrilling words, and wound up Catherine's feelings to the highest point of ecstasy.' Considered the most light-hearted and satirical of Austen's novels, Northanger Abbey tells the story of an unlikely young heroine Catherine Morland. While staying in Bath, Catherine meets Henry Tilney and his sister Eleanor who invite her to their family estate, Northanger Abbey. A fan of Gothic Romance novels, naive Catherine is soon letting her imagination run wild in the atmospheric abbey, fuelled by her friendship with the vivacious Isabella Thorpe. It is only when the realities of life set in around her that Catherine's fantastical world is shattered. A coming-of-age novel, Austen expertly parodies the Gothic romance novels of her time and reveals much about her unsentimental view of love and marriage in the eighteenth century. N° de réf. du vendeur AAZ9780007368600

Description du livre Paperback. Etat : new. Paperback. HarperCollins is proud to present its range of best-loved, essential classics. 'Northanger Abbey! These were thrilling words, and wound up Catherine's feelings to the highest point of ecstasy.' Considered the most light-hearted and satirical of Austen's novels, Northanger Abbey tells the story of an unlikely young heroine Catherine Morland. While staying in Bath, Catherine meets Henry Tilney and his sister Eleanor who invite her to their family estate, Northanger Abbey. A fan of Gothic Romance novels, naive Catherine is soon letting her imagination run wild in the atmospheric abbey, fuelled by her friendship with the vivacious Isabella Thorpe. It is only when the realities of life set in around her that Catherine's fantastical world is shattered. A coming-of-age novel, Austen expertly parodies the Gothic romance novels of her time and reveals much about her unsentimental view of love and marriage in the eighteenth century. HarperCollins is proud to present its range of best-loved, essential classics. Shipping may be from multiple locations in the US or from the UK, depending on stock availability. N° de réf. du vendeur 9780007368600