Articles liés ŕ Return to Treasure Island and the Search for Captain...

Return to Treasure Island and the Search for Captain Kidd 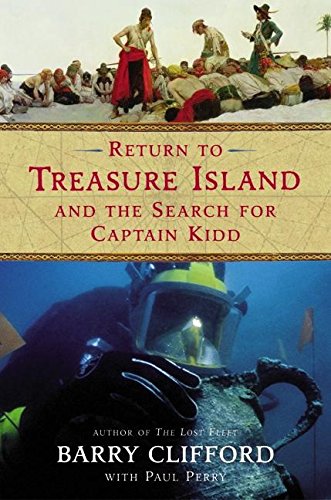 When history's most famous pirate, Captain Kidd, was hanged in 1701, he left behind a trail of treasure and treachery that stretched halfway around the world. For undersea explorer Barry Clifford, the biggest prize of all would be to find the Adventure Galley, Kidd's legendary pirate ship. In the world of pirate archaeology, it was the Holy Grail.

With the help of the Discovery Channel, Clifford fields an expedition that includes some of America's top experts in shipwreck recovery. Their goal is to find, identify, and possibly excavate the remains of history's most famous pirate ship. The search takes them to the exotic nation of Madagascar and a tiny island off its rocky coast known to historians as the model for Robert Louis Stevenson's Treasure Island. There, amid pirate graveyards, broken porcelain intended for a European royal family, and native rituals that include blood sacrifice, Clifford and his crew find far more than they bargained for. The island's murky harbor is filled with sunken pirate ships, making it difficult to single out the Adventure Galley, and the shores are teeming with people who want the expedition stopped. The team races to find the ship before dark forces expel it from the island -- forces motivated by the same resentment and greed that caused Kidd's downfall.

Return to Treasure Island and the Search for Captain Kidd weaves together two exciting stories: the saga of Captain William Kidd, one of history's most baffling and mysterious figures, and Barry Clifford's obsessive quest to find perhaps the most notorious pirate ship of all time. The result is a tale of treasure and adventure that ends in death -- both Kidd's and, three hundred years later, that of a rival archaeologist who attempts to stop Clifford's expedition.

Barry Clifford is an undersea explorer who discovered and excavated the Whydah, the first pirate shipwreck ever authenticated, off the coast of Cape Cod. He established the Expedition Whydah Sea Lab and Learning Center in Provincetown, Massachusetts, where he also owns and operates a pirate museum.

1. Return to Treasure Island and the Search for Captain Kidd

2. Return to Treasure Island and the Search for Captain Kidd

Description du livre Hardcover. Etat : New. Etat de la jaquette : New. 1st Edition. Small island off the coast of Madagascar holds many sunken ships and the race is on to find Kidd's ship, Adventure Galley, before the authorities oust them from the water and search. N° de réf. du vendeur 022601

3. RETURN TO TREASURE ISLAND AND TH