Pratchett, Terry The Color of Magic 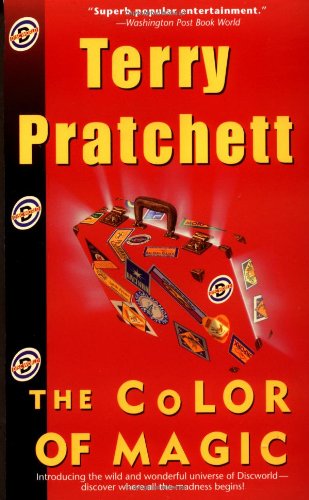 'Twoflower was a tourist, the first ever seen on the discworld. Tourist, Rincewind decided, meant idiot.'

Somewhere on the frontier between thought and reality exists the Discworld, a parallel time and place which might sound and smell very much like our own, but which looks completely different. It plays by different rules. Certainly it refuses to succumb to the quaint notion that universes are ruled by pure logic and the harmony of numbers.

But just because the Disc is different doesn't mean that some things don't stay the same. Its very existence is about to be threatened by a strange new blight: the arrival of the first tourist, upon whose survival rests the peace and prosperity of the land. But if the person charged with maintaining that survival in the face of robbers, mercenaries and, well, Death, is a spectacularly inept wizard, a little logic might turn out to be a very good idea...

a flat world sitting on the backs of four elephants who hurtle through space balanced on a giant turtle. In truth, the Discworld is not so different from our own. Yet, at the same time, very different . . . but not so much.

In this, the maiden voyage through Terry Pratchett's divinely and recognizably twisted alternate dimension, the well-meaning but remarkably inept wizard Rincewind encounters something hitherto unknown in the Discworld: a tourist! Twoflower has arrived, Luggage by his side, to take in the sights and, unfortunately, has cast his lot with a most inappropriate tour guide—a decision that could result in Twoflower's becoming not only Discworld's first visitor from elsewhere . . . but quite possibly, portentously, its very last. And, of course, he's brought Luggage along, which has a mind of its own. And teeth.