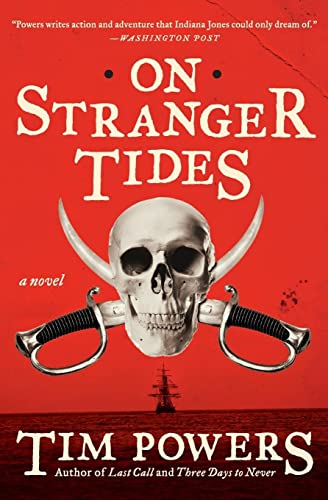 On Stranger Tides The book the 4th instalment of Pirates of the Caribbean is based on it's a swashbuckling, rip-roaring adventure: Pirates! Zombies! Blackbeard! Damsels in distress! Full description

“One of the most original and innovative writers of fantasy currently working....The quality of Powers’s prose never falters....His writing defies characterization and he never repeats himself.” (Washington Post)

“[On Stranger Tides] promises marvels and horrors, and delivers them all. You’ll love the characters, you’ll stay awake all night reading it, and when you finally do sleep, you’ll find this story playing through your dreams.” (Orson Scott Card)

“Tim Powers is an uncommon literary talent....Exceedingly readable....If heavenly muses were to put Dean Koontz, John Le Carré and Robert Parker into a creative blender, then molded the mix into a brand new writer, the result would be something akin to Tim Powers.” (Denver Post)

“Powers has forged a style of narrative uniquely his own, one filled with sharply drawn characters, fully imagined settings, elaborate underpinnings that pull all rugs out from under us and let us glimpse terrible, ragged floors beneath.” (Los Angeles Times)

“Tim Powers has long been one of my absolutely favorite writers, those whose new books I snatch up as soon as they appear....The qualities I most admire in him [are] intelligence, narrative sparkle, great dialogue, speculative imagination, and emotional power.” (Peter Straub)

“Powers writes action and adventure that Indiana Jones could only dream of.”
—Washington Post

The remarkable Tim Powers—who ingeniously married the John Le Carrè spy novel to the otherworldly in his critically acclaimed Declare—brings us pirate adventure with a dazzling difference. On Stranger Tides features Blackbeard, ghosts, voodoo, zombies, the fable Fountain of Youth…and more swashbuckling action than you could shake a cutlass at, as reluctant buccaneer John Shandy braves all manner of peril, natural and supernatural, to rescue his ensorcelled love. Nominated for the Locus and World Fantasy Awards, On Stranger Tides is the book that inspired the motion picture Pirates of the Caribbean: On Stranger Tides—non-stop, breathtaking fiction from the genius imagination that conceived Last Call, Expiration Date, and Three Days to Never.

1. On Stranger Tides (Paperback or Softback)

Description du livre Paperback. Etat : new. Paperback. "Powers writes action and adventure that Indiana Jones could only dream of." --Washington Post "Tim Powers is a brilliant writer." --William Gibson The remarkable Tim Powers--who ingeniously married the John Le Carr Shipping may be from multiple locations in the US or from the UK, depending on stock availability. N° de réf. du vendeur 9780062101075