Coelho, Paulo The Alchemist 25th Anniversary: A Fable About Following Your Dream

The Alchemist 25th Anniversary: A Fable About Following Your Dream 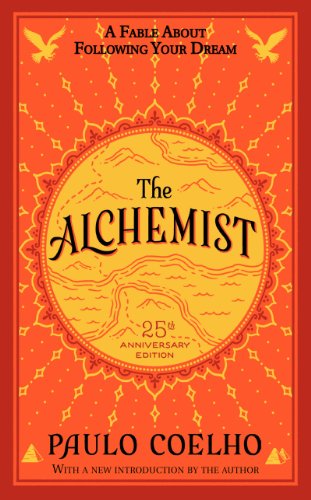 Amazon.co.uk Review Like the one-time bestseller Jonathan Livingston Seagull, The Alchemist presents a simple fable, based on simple truths and places it in a highly unique situation. And though we may sense a bestselling formula, it is certainly not a new one: even the ancient tribal storytellers knew that this is the most successful method of entertaining an audience while slipping in a lesson or two. Brazilian storyteller Paulo Coehlo introduces Santiago, an Andalucian shepherd boy who one night dreams of a distant treasure in the Egyptian pyramids. And so he's off: leaving Spain to literally follow his dream. Along the way he meets many spiritual messengers, who come in unassuming forms such as a camel driver and a well-read Englishman. In one of the Englishman's books, Santiago first learns about the alchemists--men who believed that if a metal were heated for many years, it would free itself of all its individual properties, and what was left would be the "Soul of the World." Of course he does eventually meet an alchemist, and the ensuing student-teacher relationship clarifies much of the boy's misguided agenda, while also emboldening him to stay true to his dreams. "My heart is afraid that it will have to suffer," the boy confides to the alchemist one night as they look up at a moonless night. "Tell your heart that the fear of suffering is worse than the suffering itself," the alchemist replies. "And that no heart has ever suffered when it goes in search of its dreams, because every second of the search is a second's encounter with God and with eternity."

“It’s a brilliant, magical, life-changing book that continues to blow my mind with its lessons. [...] A remarkable tome.” (NEIL PATRICK HARRIS, ACTOR)

“it changed my whole life. I realized of all of the people who had conspired to get me to this place.” (PHARRELL WILLIAMS, MUSICIAN AND SONG-WRITER)

“A wise and inspiring fable about the pilgrimage that life should be.” (M. Scott Peck)

“An adventure story full of magic and wisdom.” (Rudolfo Anaya, author of Bless Me, Ultima)

“[His] books have had a life-enchanting effect on millions of people.” (London Times)

“A beautiful story with a pointed message for every reader.” (Joseph Girzone, author of Joshua)

“As memorable and meaningful as Saint-Exupery’s The Little Prince.” (Austin American-Statesman)

1. The Alchemist 25th Anniversary: A Fable About Following Your Dream

Description du livre Harper, United States, 2020. Paperback. Etat : New. 25th. Language: English. Brand new Book. The 25th Anniversary Edition of the beloved novel!Santiago, a young shepherd living in the hills of Andalucia, feels that there is more to life than his humble home and his flock. One day he finds the courage to follow his dreams into distant lands, each step galvanised by the knowledge that he is following the right path: his own. The people he meets along the way, the things he sees and the wisdom he learns are life-changing. N° de réf. du vendeur BZE9780062355300

3. The Alchemist 25th Anniversary: A Fable About Following Your Dream

4. Alchemist - The 25th Anniversary: A Fable About Following Your Dream

6. The Alchemist 25th Anniversary: A Fable About Following Your Dream

7. Alchemist - The 25th Anniversary : A Fable About Following Your Dream

Description du livre Harper Collins Publ. USA Jun 2020, 2020. Taschenbuch. Etat : Neu. Neuware - An international bestsellerOver 80 million copies sold worldwideA PBS Great American Read Top 100 pickA special 25th anniversary edition of the extraordinary international bestseller, including a new Foreword by Paulo Coelho.Combining magic, mysticism, wisdom and wonder into an inspiring tale of self-discovery, The Alchemist has become a modern classic, selling millions of copies around the world and transforming the lives of countless readers across generations.Paulo Coelho's masterpiece tells the mystical story of Santiago, an Andalusian shepherd boy who yearns to travel in search of a worldly treasure. His quest will lead him to riches far different-and far more satisfying-than he ever imagined. Santiago's journey teaches us about the essential wisdom of listening to our hearts, of recognizing opportunity and learning to read the omens strewn along life's path, and, most importantly, to follow our dreams. 208 pp. Englisch. N° de réf. du vendeur 9780062355300