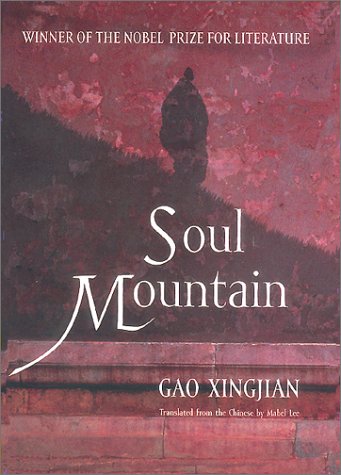 In 1983 Chinese playwright, critic, fiction writer, and painter Gao Xingjian (pronounced gow shing-jen) was diagnosed with lung cancer and faced imminent death.  But six weeks later, a second examination revealed there was no cancer -- he had won "a reprieve from death" and had been thrown back into the world of the living.  Faced with a repressive cultural environment and the threat of a spell in a prison farm, Gao fled Beijing.  He traveled to the remote mountains and ancient forests of Sichuan in southwest China and from there back to the east coast, a journey of fifteen thousand kilometers over a period of five months.  The results of this epic voyage of discovery is Soul Mountain.

A bold, lyrical, prodigious novel, Soul Mountain probes the human soul with an uncommon directness and candor.  Interwoven with the myriad of stories and countless memorable characters -- from venerable Daosit masters and Buddhist nuns to mythical Wild Men, deadly Qichun snakes, and farting buses -- is the narrator's poignant inner journey and search for freedom.

Fleeing the social conformity required by the Communist government, he wanders deep into the regions of the Qiang, Miago, and Yi peoples located on the fringes of Han Chinese civilization and discovers a plethora of different traditions, history, legends, folk songs, and landscapes. Slowly, with the help of memory, imagination, and sensory experience, he reconstructs his personal past. He laments the impact of the Cultural Revolution on the ecology -- both human and physical -- of China. And in a polyphony of narrating selves -- the narrator's "I" spawns a "you," a "she," and a "he," each with a distinct perspective and voice -- the novel delights in the freedom of the imagination to expand the notion of the individual self.

Storytelling saves the narrator from a deep loneliness that is part of the human condition. His search for meaning -- in life, in the journey -- turns up the possibility that there may be no meaning. The elusive Lingshan ("Soul Mountain"), which becomes the object of his quest, never yields up its secrets, but the journey is a rich, strange, provocative, and rewarding one. Soul Mountain is a novel of immense wisdom and profound beauty.

Gao Xingjian (whose name is pronounced gow shing-jen) is the first Chinese recipient of the Nobel Prize in Literature. Born in 1940 in Jiangxi province in eastern China, he has lived in France since 1987. Gao Xingjian is an artistic innovator, in both the visual arts and literature. He is that rare multitalented artist who excels as novelist, playwright, essayist, director, and painter. In addition to Soul Mountain and One Man's Bible, a book of his plays, The Other Shore, and a volume of his paintings, Return to Painting, have been published in the United States.

Description du livre Hardcover. Etat : New. Etat de la jaquette : New. 1st Edition. FIRST EDITION/FIRST PRINTING with a complete number line beginning in 1. NEW & UNREAD - SPINE HAS NOT BEEN CRACKED - no flaws or defects - Hardcover in Dust Jacket as issued. DUST JACKET IN PROTECTIVE BRODART COVER - A VERY COLLECTIBLE COPY OF THIS BOOK - PHOTOS OF THE ACTUAL BOOK SENT UPON REQUEST. The boards Are Clean, Not Bumped. Fore Edges Are Clean. Dust Jacket Is In Fine Condition. No Chipping, Crinkles, or tears. Not Price Clipped. All books are boxed and shipped with bubble wrap - ALL BOOKS HAVE BEEN BOXED IN CLIMATE CONTROLLED STORAGE AND HAVE NOT BEEN TOUCHED BY ANY OTHER HUMAN THAN ME FOR AT LEAST THE LAST 10 YEARS - ALL BOOKS ARE SEALED AND BUBBLE WRAPPED AND SHIPPED IN BOXES - YOU CAN BUY HERE WITH CONFIDENCE KNOWING THAT A BUNCH OF STRANGERS HAVE NOT HANDLED YOUR BOOK -. N° de réf. du vendeur 006354