Articles liés ŕ Nothing to be Frightened Of

Barnes, Julian Nothing to be Frightened Of

Nothing to be Frightened Of 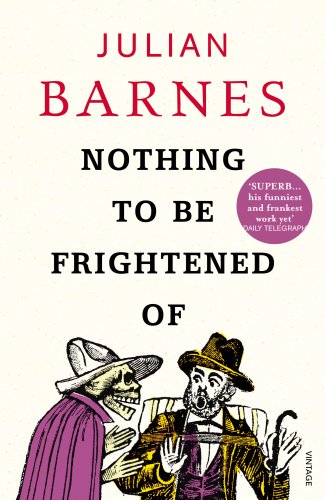 Nothing to be Frightened of A family memoir, an exchange with the author's brother (a philosopher), a meditation on mortality and the fear of death, a celebration of art, an argument with and about God, and a homage to the French writer Jules Renard. Full description

I don’t believe in God, but I miss Him. That’s what I say when the question is put. I asked my brother, who has taught philosophy at Oxford, Geneva and the Sorbonne, what he thought of such a statement, without revealing that it was my own. He replied with a single word: ‘Soppy.’

The person to begin with is my maternal grandmother, Nellie Louisa Scoltock, née Machin. She was a teacher in Shropshire until she married my grandfather, Bert Scoltock. Not Bertram, not Albert, just Bert: so christened, so called, so cremated. He was a headmaster with a certain mechanical dash to him: a motorcycle-and-sidecar man, then owner of a Lanchester, then, in retirement, driver of a rather pompously sporty Triumph Roadster, with a three-person bench seat in front, and two bucket seats when the top was down. By the time I knew them, my grandparents had come south to be near their only child. Grandma went to the Women’s Institute; she pickled and bottled; she plucked and roasted the chickens and geese that Grandpa raised. She was petite, outwardly unopinionated, and had the thickened knuckles of old age; she needed soap to get her wedding ring off. Their wardrobe was full of home-knitted cardigans, Grandpa’s tending to feature more masculine cable stitch. They had regular appointments with the chiropodist, and were of that generation advised by dentists to have all their teeth out in one go. This was a normal rite of passage then: from being rickety-gnashered to fully porcelained in one leap, to all that buccal sliding and clacking, to social embarrassment and the foaming glass on the bedside table.

The change from teeth to dentures struck my brother and me as both grave and ribald. But my grandmother’s life had contained another enormous change, never alluded to in her presence. Nellie Louisa Machin, daughter of a labourer in a chemical works, had been brought up a Methodist; while the Scoltocks were Church of England. At some point in her young adulthood, my grandmother had suddenly lost her faith and, in the smooth narration of family lore, found a replacement: socialism. I have no idea how strong her religious faith had been, or what her family’s politics were; all I know is that she once stood for the local council as a socialist and was defeated. By the time I knew her, in the 1950s, she had progressed to being a communist. She must have been one of the few old-age pensioners in suburban Buckinghamshire who took the Daily Worker and — so my brother and I insisted to one another — fiddled the housekeeping to send donations to the newspaper’s Fighting Fund.

In the late 1950s, the Sino-Soviet Schism took place, and communists worldwide were obliged to choose between Moscow and Peking. For most of the European faithful, this was not a difficult decision; nor was it for the Daily Worker, which received funding as well as directives from Moscow. My grandmother, who had never been abroad in her life, who lived in genteel bungalowdom, decided for undisclosed reasons to throw in her lot with the Chinese. I welcomed this mysterious decision with blunt self-interest, since her Worker was now supplemented by China Reconstructs, a heretical magazine posted direct from the distant continent. Grandma would save me the stamps from the biscuity envelopes. These tended to celebrate industrial achievement — bridges, hydroelectric dams, lorries rolling off production lines — or else show various breeds of dove in peaceful flight.

My brother did not compete for such offerings, because some years previously there had been a Stamp-Collecting Schism in our home. He had decided to specialize in the British Empire. I, to assert my difference, announced that I would therefore specialize in a category which I named, with what seemed like logic to me, Rest of the World. It was defined solely in terms of what my brother didn’t collect. I can no longer remember if this move was aggressive, defensive, or merely pragmatic. All I know is that it led to some occasionally baffling exchanges in the school stamp club among philatelists only recently out of short trousers. ‘So, Barnesy, what do you collect?’ ‘Rest of the World.’

My grandfather was a Brylcreem man, and the antimacassar on his Parker Knoll armchair — a high-backed number with wings for him to snooze against — was not merely decorative. His hair had whitened sooner than Grandma’s; he had a clipped, military moustache, a metal-stemmed pipe and a tobacco pouch which distended his cardigan pocket. He also wore a chunky hearing aid, another aspect of the adult world — or rather, the world on the farther side of adulthood — which my brother and I liked to mock. ‘Beg pardon?’ we would shout satirically at one another, cupping hands to ears. Both of us used to look forward to the prized moment when our grandmother’s stomach would rumble loudly enough for Grandpa to be roused from his deafness into the enquiry, ‘Telephone, Ma?’ An embarrassed grunt later, they would go back to their newspapers. Grandpa, in his male armchair, deaf aid occasionally whistling and pipe making a hubble-bubble noise as he sucked on it, would shake his head over the Daily Express, which described to him a world where truth and justice were constantly imperilled by the Communist Threat. In her softer, female armchair — in the red corner — Grandma would tut-tut away over the Daily Worker, which described to her a world where truth and justice, in their updated versions, were constantly imperilled by Capitalism and Imperialism.

Grandpa, by this time, had reduced his religious observance to watching Songs of Praise on television. He did woodwork and gardened; he grew his own tobacco and dried it in the garage loft, where he also stored dahlia tubers and old copies of the Daily Express bound with hairy string. He favoured my brother, taught him how to sharpen a chisel, and left him his chest of carpentry tools. I can’t remember him teaching (or leaving) me anything, though I was once allowed to watch while he killed a chicken in his garden shed. He took the bird under his arm, stroked it into calmness, then laid its neck on a green metal wringing machine screwed to the door jamb. As he brought the handle down, he gripped the bird’s body ever more tightly against its final convulsions.

My brother was allowed not just to watch, but also participate. Several times he got to pull the lever while Grandpa held the bird. But our memories of the slaughter in the shed diverge into incompatibility. For me, the machine merely wrung the chicken’s neck; for him, it was a junior guillotine. ‘I have a clear picture of a small basket underneath the blade. I have a (less clear) picture of the head dropping, some (not much) blood, Grandpa putting the headless bird on the ground, its running around for a few moments . . .’ Is my memory sanitized, or his infected by films about the French Revolution? In either case, Grandpa introduced my brother to death — and its messiness — better than he did me. ‘Do you remember how Grandpa killed the geese before Christmas?’ (I do not.) ‘He used to chase the destined goose round its pen, flailing at it with a crowbar. When he finally got it, he would, for good measure, lay it on the ground, put the crowbar across its neck, and tug on its head.’

My brother remembers a ritual — never witnessed by me — which he called the Reading of the Diaries. Grandma and Grandpa each kept separate diaries, and of an evening would sometimes entertain themselves by reading out loud to one another what they had recorded on that very week several years previously. The entries were apparently of considerable banality but frequent disagreement. Grandpa: ‘Friday. Worked in garden. Planted potatoes.’ Grandma: ‘Nonsense. “Rained all day. Too wet to work in garden.”’

My brother also remembers that once, when he was very small, he went into Grandpa’s garden and pulled up all the onions. Grandpa beat him until he howled, then turned uncharacteristically white, confessed everything to our mother, and swore he would never again raise his hand to a child. Actually, my brother doesn’t remember any of this — neither the onions, nor the beating. He was just told the story repeatedly by our mother. And indeed, were he to remember it, he might well be wary. As a philosopher, he believes that memories are often false, ‘so much so that, on the Cartesian principle of the rotten apple, none is to be trusted unless it has some external support’. I am more trusting, or self-deluding, so shall continue as if all my memories are true.

Our mother was christened Kathleen Mabel. She hated the Mabel, and complained about it to Grandpa, whose explanation was that he ‘had once known a very nice girl called Mabel’. I have no idea about the progress or regress of her religious beliefs, though I own her prayer book, bound together with Hymns Ancient and Modern in soft brown suede, each volume signed in surprising green ink with her name and the date: ‘Dec: 25th . 1932.’ I admire her punctuation: two full stops and a colon, with the stop beneath the ‘th’ placed exactly between the two letters. You don’t get punctuation like that nowadays.

In my childhood, the three unmentionable subjects were the traditional ones: religion, politics and sex. By the time my mother and I came to discuss these matters — the first two, that is, the third being permanently off the agenda — she was ‘true blue’ in politics, as I would guess she always had been. As for religion, she told me firmly that she didn’t want ‘any of that mumbo-jumbo’ at her funeral. So when the undertaker asked if I wanted the ‘religious symbols’ removed from the crematorium wall, I told him I tho...

"Both fun and funny. It is sharp too, in the sense of painful as well as witty... Barnes dissects with tremendous verve and insight this awesome inevitability of death and its impact on the human psyche. He also tears at your heart" (New Statesman)

"A maverick form of family memoir that is mainly an extended reflection on the fear of death and on that great consolation, religious belief... It is entertaining, intriguing, absorbing...an inventive and invigorating slant on what is nowadays called 'life writing'. It took me hours to write this review because each reference to my notes set me off rereading; that is a reviewer's ultimate accolade" (Penelope Lively Financial Times)

"A brilliant bible of elegant despair...that most urgent kind of self-help manual: the one you must read before you die" (Tim Adams Vogue)

"An elegant memoir and meditation. A deep seismic tremor of a book that keeps rumbling and grumbling in the mind for weeks thereafter" (Garrison Keillor)

Nothing to be Frightened Of

Nothing To Be Frightened Of