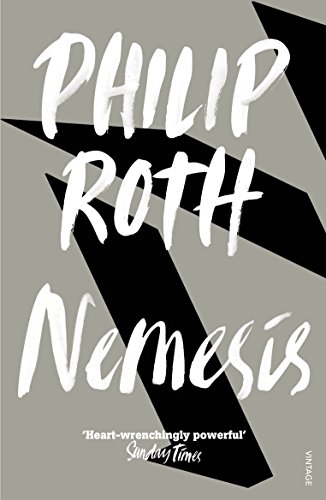 With their childish voices, the girls encamped at the far edge of the playground improvised their way from A to Z and back again, alliterating the nouns at the end of the line, sometimes preposterously, each time around. Leaping and darting about with excitement—except when Myron Kopferman and his like would apishly interfere—they exhibited astounding energy; unless they were summoned by the playground director to retreat to the shade of the school because of the heat, they didn’t vacate that street from the Friday in June when the spring term ended to the Tuesday after Labor Day when the fall term began and they could jump rope only after school and at recess.
The playground director that year was Bucky Cantor, who, because of poor vision that necessitated his wearing thick eyeglasses, was one of the few young men around who wasn’t off fighting in the war. During the previous school year, Mr. Cantor had become the new phys ed teacher at Chancellor Avenue School and so already knew many of us who habituated the playground from the gym classes he taught. He was twenty-three that summer, a graduate of South Side, Newark’s mixed-race, mixed-religion high school, and Panzer College of Physical Education and Hygiene in East Orange. He stood slightly under five feet five inches tall, and though he was a superior athlete and strong competitor, his height, combined with his poor vision, had prevented him from playing college-level football, baseball, or basketball and restricted his intercollegiate sports activity to throwing the javelin and lifting weights. Atop his compact body was a good-sized head formed of emphatically slanting and sloping components: wide pronounced cheekbones, a steep forehead, an angular jaw, and a long straight nose with a prominent bridge that lent his profile the sharpness of a silhouette engraved on a coin. His full lips were as well defined as his muscles, and his complexion was tawny year-round. Since adolescence he had worn his hair in a military-style crewcut. You particularly noticed his ears with that haircut, not because they were unduly large, which they were not, not necessarily because they were joined so closely to his head, but because, seen from the side, they were shaped much like the ace of spades in a pack of cards, or the wings on the winged feet of mythology, with topmost tips that weren’t rounded off, as most ears are, but came nearly to a point. Before his grandfather dubbed him Bucky, he was known briefl y as Ace to his childhood street pals, a nickname inspired not merely by his precocious excellence at sports but by the uncommon configuration of those ears.
Altogether the oblique planes of his face gave the smoky gray eyes back of his glasses—eyes long and narrow like an Asian’s—a deeply pocketed look, as though they were not so much set as cratered in the skull. The voice emerging from this precisely delineated face was, unexpectedly, rather high-pitched, but that did not diminish the force of his appearance. His was the cast-iron, wear-resistant, strikingly bold face of a sturdy young man you could rely on.

Philip Roth was born in Newark, New Jersey on 19 March 1933. The second child of second-generation Americans, Bess and Herman Roth, Roth grew up in the largely Jewish community of Weequahic, a neighbourhood he was to return to time and again in his writing. After graduating from Weequahic High School in 1950, he attended Bucknell University, Pennsylvania and the University of Chicago, where he received a scholarship to complete his M.A. in English Literature.

In 1959, Roth published Goodbye, Columbus – a collection of stories, and a novella – for which he received the National Book Award. Ten years later, the publication of his fourth novel, Portnoy’s Complaint, brought Roth both critical and commercial success, firmly securing his reputation as one of America’s finest young writers. Roth was the author of thirty-one books, including those that were to follow the fortunes of Nathan Zuckerman, and a fictional narrator named Philip Roth, through which he explored and gave voice to the complexities of the American experience in the twentieth- and twenty-first centuries.

Roth’s lasting contribution to literature was widely recognised throughout his lifetime, both in the US and abroad. Among other commendations he was the recipient of the Pulitzer Prize, the International Man Booker Prize, twice the winner of the National Book Critics Circle Award and the National Book Award, and presented with the National Medal of Arts and the National Humanities Medal by Presidents Clinton and Obama, respectively.

Philip Roth died on 22 May 2018 at the age of eighty-five having retired from writing six years previously.

Description du livre Vintage Publishing, United Kingdom, 2011. Paperback. Etat : New. Language: English. Brand new Book. It's the sweltering summer of 1944, and Newark is in the grip of a terrifying epidemic. Decent, athletic twenty-three year old playground director Bucky Cantor is devoted to his charges and ashamed with himself because his weak eyes have excluded him from serving in the war alongside his contemporaries. As polio begins to ravage Bucky's playground - child by helpless child - Roth leads us through every emotion such a pestilence can breed: the fear, the panic, the anger, the bewilderment, the suffering and the pain. 'The genius of Philip Roth.back at his imperious best in this heartbreaking tale. The eloquence of Roth's storytelling makes Nemesis one of his most haunting works' Daily Mail 'Cantor is one of Roth's best creations and the atmosphere of terror is masterfully fashioned' Sunday Telegraph 'Very fine, very unsettling' Douglas Kennedy, The Times. N° de réf. du vendeur AAZ9780099542261

Description du livre Vintage. Etat : New. 2011. 0th Edition. Paperback. It's Summer, 1944. In the 'stifling heat of equatorial Newark', a terrifying epidemic is raging. Vigorous, decent, twenty-three year old playground director Bucky Cantor is devoted to his charges and disappointed with himself because his weak eyes have excluded him from serving in the war. Num Pages: 304 pages. BIC Classification: FA. Category: (G) General (US: Trade). Dimension: 128 x 196 x 21. Weight in Grams: 218. . . . . . Books ship from the US and Ireland. N° de réf. du vendeur V9780099542261

Description du livre 2011. Paperback. Etat : New. Paperback. In 'the stifling heat of equatorial Newark', a terrifying epidemic is raging, threatening the children of the New Jersey city with maiming, paralysis, life-long disability, ev.Shipping may be from our Sydney, NSW warehouse or from our UK or US warehouse, depending on stock availability. 304 pages. 0.213. N° de réf. du vendeur 9780099542261