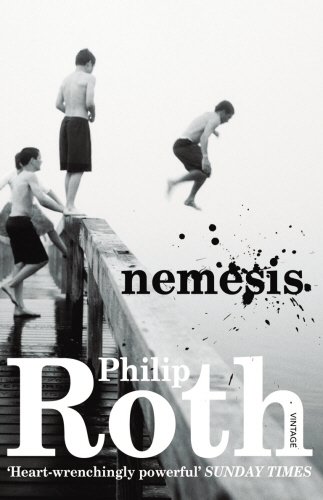 With their childish voices, the girls encamped at the far edge of the playground improvised their way from A to Z and back again, alliterating the nouns at the end of the line, sometimes preposterously, each time around. Leaping and darting about with excitement—except when Myron Kopferman and his like would apishly interfere—they exhibited astounding energy; unless they were summoned by the playground director to retreat to the shade of the school because of the heat, they didn’t vacate that street from the Friday in June when the spring term ended to the Tuesday after Labor Day when the fall term began and they could jump rope only after school and at recess.
The playground director that year was Bucky Cantor, who, because of poor vision that necessitated his wearing thick eyeglasses, was one of the few young men around who wasn’t off fighting in the war. During the previous school year, Mr. Cantor had become the new phys ed teacher at Chancellor Avenue School and so already knew many of us who habituated the playground from the gym classes he taught. He was twenty-three that summer, a graduate of South Side, Newark’s mixed-race, mixed-religion high school, and Panzer College of Physical Education and Hygiene in East Orange. He stood slightly under five feet five inches tall, and though he was a superior athlete and strong competitor, his height, combined with his poor vision, had prevented him from playing college-level football, baseball, or basketball and restricted his intercollegiate sports activity to throwing the javelin and lifting weights. Atop his compact body was a good-sized head formed of emphatically slanting and sloping components: wide pronounced cheekbones, a steep forehead, an angular jaw, and a long straight nose with a prominent bridge that lent his profile the sharpness of a silhouette engraved on a coin. His full lips were as well defined as his muscles, and his complexion was tawny year-round. Since adolescence he had worn his hair in a military-style crewcut. You particularly noticed his ears with that haircut, not because they were unduly large, which they were not, not necessarily because they were joined so closely to his head, but because, seen from the side, they were shaped much like the ace of spades in a pack of cards, or the wings on the winged feet of mythology, with topmost tips that weren’t rounded off, as most ears are, but came nearly to a point. Before his grandfather dubbed him Bucky, he was known briefl y as Ace to his childhood street pals, a nickname inspired not merely by his precocious excellence at sports but by the uncommon configuration of those ears.
Altogether the oblique planes of his face gave the smoky gray eyes back of his glasses—eyes long and narrow like an Asian’s—a deeply pocketed look, as though they were not so much set as cratered in the skull. The voice emerging from this precisely delineated face was, unexpectedly, rather high-pitched, but that did not diminish the force of his appearance. His was the cast-iron, wear-resistant, strikingly bold face of a sturdy young man you could rely on.

In 'the stifling heat of equatorial Newark', a terrifying epidemic is raging, threatening the children of the New Jersey city with maiming, paralysis, life-long disability, even death. This is the startling and surprising theme of Roth's wrenching new book: a wartime polio epidemic in the summer of 1944 and the effect it has on a closely-knit, family-oriented Newark community and its children.

At the centre of Nemesis is a vigorous, dutiful, twenty-three-year old playground director, Bucky Cantor, a javelin thrower and a weightlifter, who is devoted to his charges and disappointed with himself because his weak eyes have excluded him from serving in the war alongside his contemporaries. Focusing on Cantor's dilemmas as polio begins to ravage his playground - and on the everyday realities he faces - Roth leads us through every inch of emotion such a pestilence can breed: the fear, the panic, the anger, the bewilderment, the suffering, and the pain.

Moving between the smouldering, malodorous streets of besieged Newark and Indian Hill, a pristine children's summer camp high in the Poconos - whose 'mountain air was purified of all contaminants' - Roth depicts a decent, energetic man with the best intentions struggling in his own private war against the epidemic. Roth is tenderly exact at every point about Cantor's passage into personal disaster and no less exact about the condition of childhood.

Through this story runs the dark question that haunts all four of Roth's late short novels, Everyman, Indignation, The Humbling, and now, Nemesis: what choices fatally shape a life? How powerless is each of us up against the force of circumstances?

Description du livre Paperback. Etat : Good. The book has been read but remains in clean condition. All pages are intact and the cover is intact. Some minor wear to the spine. N° de réf. du vendeur GOR005172626

Description du livre Vintage, 2011. Paperback. Etat : Used; Good. **SHIPPED FROM UK** We believe you will be completely satisfied with our quick and reliable service. All orders are dispatched as swiftly as possible! Buy with confidence! Aloysius Ihezie. N° de réf. du vendeur 2328191

Description du livre Random House Export. Paperback. Etat : Good. No Jacket. A copy that has been read, but remains in clean condition. All pages are intact, and the cover is intact. The spine may show signs of wear. Pages can include limited notes and highlighting, and the copy can include previous owner inscriptions. At ThriftBooks, our motto is: Read More, Spend Less. N° de réf. du vendeur G0099555336I3N00