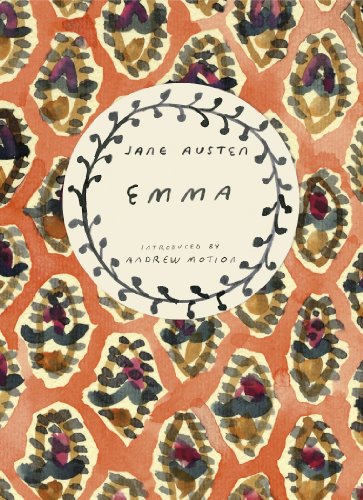 EMMA WOODHOUSE, handsome, clever, and rich, with a comfortable home and happy disposition seemed to unite some of the best blessings of existence; and had lived nearly twenty-one years in the world with very little to distress or vex her.

She was the youngest of the two daughters of a most affectionate, indulgent father; and had, in consequence of her sister's marriage, been mistress of his house from a very early period. Her mother had died too long ago for her to have more than an indistinct remembrance of her caresses; and her place had been supplied by an excellent woman as governess, who had fallen little short of a mother in affection.

Sixteen years had Miss Taylor been in Mr. Woodhouse's family, less as a governess than a friend, very fond of both daughters, but particularly of Emma. Between them it was more the intimacy of sisters. Even before Miss Taylor had ceased to hold the nominal office of governess, the mildness of her temper had hardly allowed her to impose any restraint; and the shadow of authority being now long passed away, they had been living together as friend and friend very mutually attached, and Emma doing just what she liked; highly esteeming Miss Taylor's judgment, but directed chiefly by her own.

The real evils, indeed, of Emma's situation were the power of having rather too much her own way, and a disposition to think a little too well of herself: these were the disadvantages which threatened alloy to her many enjoyments. The danger, however, was at present so unperceived, that they did not by any means rank as misfortunes with her.

Sorrow came—a gentle sorrow&mdashbut not at all in the shape of any disagreeable consciousness. Miss Taylor married. It was Miss Taylor's loss which first brought grief. It was on the wedding day of this beloved friend that Emma first sat in mournful thought of any continuance. The wedding over, and the bride people gone, her father and herself were left to dine together, with no prospect of a third to cheer a long evening. Her father composed himself to sleep after dinner, as usual, and she had then only to sit and think of what she had lost.

The event had every promise of happiness for her friend. Mr. Weston was a man of unexceptionable character, easy fortune, suitable age, and pleasant manners; and there was some satisfaction in considering with what self-denying, generous friendship she had always wished and promoted the match; but it was a black morning's work for her. The want of Miss Taylor would be felt every hour of every day. She recalled her past kindness—the kindness, the affection of sixteen years—how she had taught and how she had played with her from five years old—how she had devoted all her powers to attach and amuse her in health—and how nursed her through the various illnesses of childhood. A large debt of gratitude was owing here; but the intercourse of the last seven years, the equal footing and perfect unreserve which had soon followed Isabella's marriage, on their being left to each other, was yet a dearer, tenderer recollection. She had been a friend and companion such as few possessed: intelligent, well-informed, useful, gentle, knowing all the ways of the family, interested in all its concerns, and peculiarly interested in herself, in every pleasure, every scheme of hers; one to whom she could speak every thought as it arose, and who had such an affection for her as could never find fault.

How was she to bear the change? It was true that her friend was going only half a mile from them; but Emma was aware that great must be the difference between a Mrs. Weston, only half a mile from them, and a Miss Taylor in the house; and with all her advantages, natural and domestic, she was now in great danger of suffering from intellectual solitude. She dearly loved her father, but he was no companion for her. He could not meet her in conversation, rational or playful.
The evil of the actual disparity in their ages (and Mr. Woodhouse had not married early) was much increased by his constitution and habits; for having been a valetudinarian all his life, without activity of mind or body, he was a much older man in ways than in years; and though everywhere beloved for the friendliness of his heart and his amiable temper, his talents could not have recommended him at any time.

Her sister, though comparatively but little removed by matrimony, being settled in London, only sixteen miles off, was much beyond her daily reach; and many a long October and November evening must be struggled through at Hartfield, before Christmas brought the next visit from Isabella and her husband, and their little children, to fill the house, and give her pleasant society again.

Highbury, the large and populous village almost amounting to a town, to which Hartfield, in spite of its separate lawn, and shrubberies, and name, did really belong, afforded her no equals. The Woodhouses were first in consequence there. All looked up to them. She had many acquaintances in the place, for her father was universally civil, but not one among them who could be accepted in lieu of Miss Taylor for even half a day. It was a melancholy change; and Emma could not but sigh over it, and wish for impossible things, till her father awoke, and made it necessary to be cheerful. His spirits required support. He was a nervous man, easily depressed; fond of everybody that he was used to, and hating to part with them; hating change of every kind. Matrimony, as the origin of change, was always disagreeable; and he was by no means yet reconciled to his own daughter's marrying, nor could ever speak of her but with compassion, though it had been entirely a match of affection, when he was now obliged to part with Miss Taylor too; and from his habits of gentle selfishness, and of being never able to suppose that other people could feel differently from himself, he was very much disposed to think Miss Taylor had done as sad a thing for herself as for them, and would have been a great deal happier if she had spent all the rest of her life at Hartfield. Emma smiled and chatted as cheerfully as she could, to keep him from such thoughts; but when tea came, it was impossible for him not to say exactly as he had said at dinner:

'Poor Miss Taylor! I wish she were here again. What a pity it is that Mr. Weston ever thought of her!'

'I cannot agree with you, papa; you know I cannot. Mr. Weston is such a good-humoured, pleasant, excellent man, that he thoroughly deserves a good wife; and you would not have had Miss Taylor live with us for ever, and bear all my odd humours, when she might have a house of her own?'

'How often we shall be going to see them, and they coming to see us! We shall be always meeting! We must begin; we must go and pay our wedding-visit very soon.'

'My dear, how am I to get so far? Randalls is such a distance. I could not walk half so far.'

'No, papa; nobody thought of your walking. We must go in the carriage, to be sure.'

'The carriage! But James will not like to put the horses to for such a little way; and where are the poor horses to be while we are paying our visit?'

'They are to be put into Mr. Weston's stable, papa. You know we have settled all that already. We talked it all over with Mr. Weston last night. And as for James, you may be very sure he will always like going to Randalls, because of his daughter's being housemaid there. I only doubt whether he will ever take us anywhere else. That was your doing, papa. You got Hannah that good place. Nobody thought of Hannah till you mentioned her—James is so obliged to you!'

'I am very glad I did think of her. It was very lucky, for I would not have had poor James think himself slighted upon any account; and I am sure she will make a very good servant; she is a civil, pretty-spoken girl; I have a great opinion of her. Whenever I see her, she always curtseys and asks me how I do, in a very pretty manner; and when you have had her here to do needlework, I observe she always turns the lock of the door the right way and never bangs it. I am sure she will be an excellent servant; and it will be a great comfort to poor Miss Taylor to have somebody about her that she is used to see. Whenever James goes over to see his daughter, you know, she will be hearing of us. He will be able to tell her how we all are.'
From the eBook edition.

Jane Austen was born in Steventon rectory on 16 December 1775. Her family later moved to Bath, then to Southampton and finally to Chawton in Hampshire. She began writing Pride and Prejudice when she was twenty-two years old. It was originally called First Impressions and was initially rejected by the publishers and only published in 1813 after much revision. She published four of her novels in her lifetime, Sense and Sensibility (1811), Pride and Prejudice (1813), Mansfield Park (1814) and Emma(1816). Jane Austen died on 18th July 1817. Northanger Abbey and Persuasion were both published posthumously in 1818.

Andrew Motion has been a lecturer, editor of the Poetry Review, Editorial Director of Chatto & Windus, Poet Laureate, co-founder the Poetry Archive and was knighted for his services to literature in 2009. He is now Professor of Creative Writing at Royal Holloway, University of London. He is a Fellow of the Royal Society of Literature and lives in London.

Leanne Shapton is an illustrator, author and publisher based in New York City. http://leanneshapton.com/

Description du livre Vintage Publishing, United Kingdom, 2014. Paperback. Etat : New. Reprint. Language: English. Brand new Book. Discover the classic story behind the major new film'Jane Austen's Emma is her masterpiece, mixing the sparkle of her early books with a deep sensibility' Observer Emma is young, rich and independent. She has decided not to get married and instead spends her time organising her acquaintances' love affairs. Her plans for the matrimonial success of her new friend Harriet, however, lead her into complications that ultimately test her own detachment from the world of romance.WITH AN INTRODUCTION BY ANDREW MOTION. NḞ de réf. du vendeur BTA9780099589273

Description du livre Paperback. Etat : New. Paperback. Discover the classic story behind the major new film'Jane Austen's Emma is her masterpiece, mixing the sparkle of her early books with a deep sensibility' Observer Emma is young, rich and.Shipping may be from multiple locations in the US or from the UK, depending on stock availability. 592 pages. 0.420. NḞ de réf. du vendeur 9780099589273