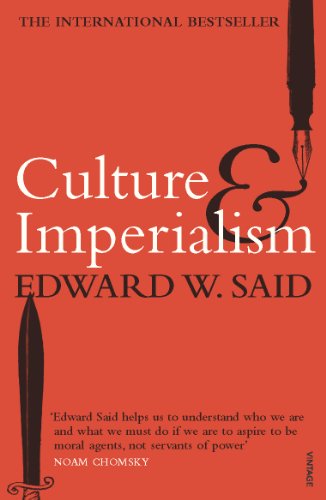 From Jane Austen to Salman Rushdie, from Yeats to media coverage of the Gulf War, this title provides an account of the roots of imperialism in European culture.

Edward Said was born in Jerusalem in 1935. In 1951 he attended a private preparatory high school in Massachusetts, America and he went on to study at Princeton University for his BA and at Yale for his MA and PhD. He became University Professor of English and Comparative Literature at Columbia Unversity. Said was bestowed with numerous honorary doctorates from universities around the world and twice received Columbia's Trilling Award and the Wellek Prize of the American Comparative Literature Association. He is best known for describing and critiquing 'Orientalism' and his book on the subject was published in 1978. He died in 2003.

"Culture and Imperialism has an eloquent, urgent topicality rare in books by literary critics" (Camille Paglia)

"Readers accustomed to the precision and elegance of Edward Said's analytical prowess will not be disappointed by Culture and Imperialism. Those discovering Said for the first time will be profoundly impressed" (Toni Morrison)

"Edward Said helps us to understand who we are and what we must do if we are to aspire to be moral agents, not servants of power" (Noam Chomsky)

Description du livre Vintage Books, 1994. Paperback. Etat : New. Paperback. From Jane Austen to Salman Rushdie, and from Yeats to the news coverage of the Gulf War, this is broad account of the roots of imperialism in European culture, and an analysis of the impac.Shipping may be from multiple locations in the US or from the UK, depending on stock availability. 528 pages. 0.362. N° de réf. du vendeur 9780099967507