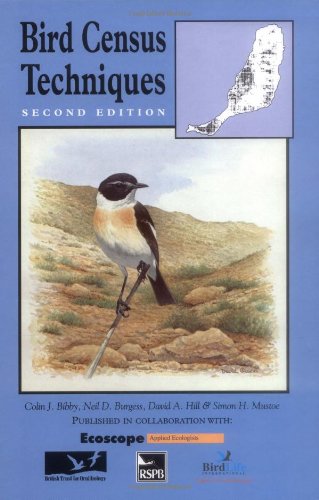 Colin Bibby is Director of Science and Policy at the International Council for Bird Preservation where he is interested in the role of birds as indicators for global biodiversity conservation. While Head of Conservation Science at the Royal Society for the Protection of birds, he was a co-author of Red Data Birds in Britain. In both capacities, he has been struck by the small number of birds of conservation concern which have been counted adequately. He has counted birds in Britain and Europe, as a professional, as an amateur participant, and as an organizer of surveys for the British Trust for Ornithology. He was motivated to start this book by the belief that bird-watchers would contribute more to conservation if they put more effort into counting birds, but lack of guidance on methods was a handicap.

In this book there are entire chapters devoted to the most widely used bird counting techniques, and attempts to amalgamate other counting methodologies into major groups were made. Examples of the use of methods are provided wherever possible and the relative value of various approaches for answering specific questions is also addressed.