The Casebook of Sherlock Holmes 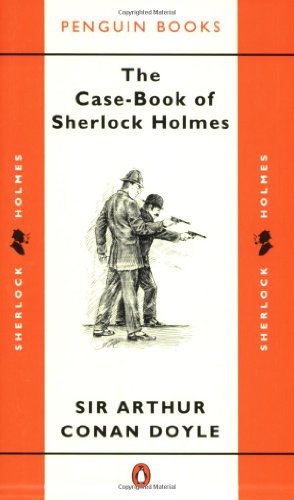 The creator of Sherlock Holmes, the world's most famous literary detective. Born in Scotland, Sir Arthur Conan Doyle was a practising doctor when he began to write tales of mystery and adventure. In addition to the Sherlock Holmes stories, Conan Doyle also wrote the Professor Challenger adventures, and his classic, The Lost World, is one of the original fantasy novels. Arthur Conan Doyle (1859-1930) was born in Edinburgh and studied medicine at the University of Edinburgh's Medical School. Graduating in 1881, he set up practice as an occultist, but as patients proved elusive he turned to writing. An important influence upon his literary career was his professor, Dr Joseph Bell, who could observe the most minute detail regarding a patient's condition. This master of deduction became the model for Conan Doyle's legendary literary creation, the detective Sherlock Holmes, introduced in A Study in Scarlet in 1887. Conan Doyle also espoused spiritualism and devoted considerable time and effort to a campaign of support for this cause. He also wrote successfully in genres other than detective fiction. His non-fiction includes military writing on the Boer War and pamphlets on spiritualism. It is known that he felt constricted at times by the popularity of Holmes, but it is nevertheless for Sherlock Holmes and his foil, the ponderous Dr Watson that he is best remembered. As Sherlock Holmes was the first detective to solve cases by deduction rather than due to an error by the criminal, Conan Doyle can be credited with creating the modern detective novel. He was knighted in 1902 for his support of the British cause in the Boer Wars. After the death of his son in the First World War, he devoted the rest of his life to spiritualism on which he wrote and lectured.

With a new Introduction by David Stuart Davies.

'Surely no man would take up my profession if it were not that danger attracts him.'

In The Casebook, you can read the final twelve stories that Sir Arthur Conan Doyle wrote about his brilliant detective. They are perhaps the most unusual and the darkest that he penned. Treachery, mutilation and the terrible consequences of infidelity are just some of the themes explored in these stories, along with atmospheric touches of the gothic, involving a bloodsucking vampire, crypts at midnight and strange bones in a furnace.

The collection His Last Bow features some of Sherlock Holmes' most dramatic cases, including the vicious revenge intrigue connected with 'The Red Circle' and the insidious murders in 'The Devil's Foot'. The title story recounts how Sherlock Holmes is brought out of retirement to help the government foil a German plot on the eve of the First World War.

These two fascinating sets of stories make a glorious farewell to the greatest detective of them all and his erstwhile companion, Dr Watson.

1. The Case-Book of Sherlock Holmes

Description du livre Penguin, 1970. Paperback. Etat : Used; Good. Dispatched, from the UK, within 48 hours of ordering. This book is in good condition but will show signs of previous ownership. Please expect some creasing to the spine and/or minor damage to the cover. Damaged cover. The cover of is slightly damaged for instance a torn or bent corner. N° de réf. du vendeur CHL4041720

Description du livre Penguin UK. Mass Market Paperback. Etat : Very Good. A copy that has been read, but remains in excellent condition. Pages are intact and are not marred by notes or highlighting, but may contain a neat previous owner name. The spine remains undamaged. At ThriftBooks, our motto is: Read More, Spend Less. N° de réf. du vendeur G0140008055I4N00

5. The Casebook of Sherlock Holmes

6. The Casebook of Sherlock Holmes

8. The Casebook of Sherlock Holmes

Description du livre Penguin Books Ltd, 1973. Paperback. Etat : Very Good. All orders are dispatched the following working day from our UK warehouse. Established in 2004, we have over 500,000 books in stock. No quibble refund if not completely satisfied. N° de réf. du vendeur mon0005098586

9. The Casebook of Sherlock Holmes

Description du livre Penguin Books Ltd, 1973. Paperback. Etat : Good. All orders are dispatched the following working day from our UK warehouse. Established in 2004, we have over 500,000 books in stock. No quibble refund if not completely satisfied. N° de réf. du vendeur mon0004939148

10. The Case-Book of Sherlock Holmes