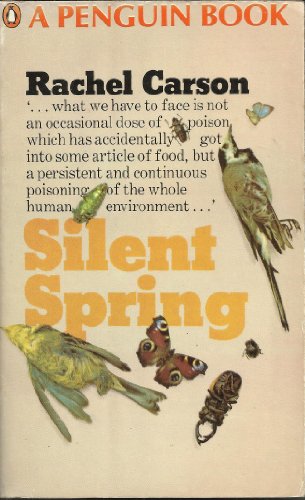 Rachel Carson's Silent Spring alerted a large audience to the environmental and human dangers of indiscriminate use of pesticides, spurring revolutionary changes in the laws affecting our air, land, and water. This Penguin Modern Classics edition includes an introduction by Lord Shackleton, a preface by World Wildlife Fund founder Julian Huxley, and an afterword by Carson's biographer Linda Lear. Now recognized as one of the most influential books of the twentieth century, Silent Spring exposed the destruction of wildlife through the widespread use of pesticides. Despite condemnation in the press and heavy-handed attempts by the chemical industry to ban the book, Rachel Carson succeeded in creating a new public awareness of the environment which led to changes in government and inspired the ecological movement. It is thanks to this book, and the help of many environmentalists, that harmful pesticides such as DDT were banned from use in the US and countries around the world. Rachel Carson (1907-64) wanted to be a writer for as long as she could remember. Her first book, Under the Sea Wind, appeared in 1941. Silent Spring, which alerted the world to the dangers of the misuse of pesticides, was published in 1962. Carson's articles on natural history appeared in the Atlantic Monthly, the New Yorker, Reader's Digest and Holiday. An ardent ecologist and preservationist, Carson warned against the dumping of atomic waste at sea and predicted global warming. If you enjoyed Silent Spring, you might like John Christopher's The Death of Grass, also available in Penguin Modern Classics. 'Carson's books brought ecology into popular consciousness'Daily Telegraph 'Very few books change the course of history. Those that do include Silent Spring'Linda Lear, author of Rachel Carson: Witness for Nature

Rachel Carson was a biology graduate from Pennsylvania College at a time when there were few women in science. In 1952 she resigned from the U. S. Fish and Wildlife Service to devote herself to writing, and produced her fourth book, Silent Spring, in 1962. So threatened was America's chemical industry by the work that they spent hundreds of thousands of dollars attempting to discredit Rachel Carson, only for U.S. President John F. Kennedy's Science Advisory Committee to investigate and subsequently vindicate Carson's work, resulting in an immediate strengthening of the regulation of chemical pesticides. In her lifetime, Rachel Carson was awarded the National Book Award for Non-Fiction, the John Burroughs Medal, the Gold Medal of the New York Zoological Society and the Audubon Society Medal, and was posthumously awarded the Presidential Medal of Freedom. She died in 1964, at the age of 56.

Description du livre Paperback. Etat : Good. All orders are dispatched the following working day from our UK warehouse. Established in 2004, we have over 500,000 books in stock. No quibble refund if not completely satisfied. N° de réf. du vendeur mon0004207688