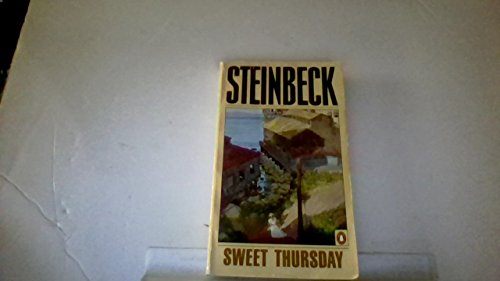 An elaboration on John Steinbeck's greatest theme - the common bonds of humanity and love which make goodness and happiness possible - this Penguin Modern Classics edition of Sweet Thursday marks a return to the memorable cast of characters he created in Cannery Row. In Monterey, on the California Coast, Sweet Thursday is what they call the day after Lousy Wednesday - one of those days that's just bad from the start. But Sweet Thursday is sunny and clear, a day when anything can happen. Returning to the scene of Cannery Row, Steinbeck brilliantly creates its bawdy, high-spirited world of bums, drunks and hookers, telling the story of what happened to everyone after the war. There are colourful characters old and new, all united by love, laughter and tears: Fauna, the latest madam at the Bear Flag brothel, Doc, still there for everyone else but feeling strangely sad himself, and Suzy, the new hustler in town who might just be the girl to save him. John Steinbeck (1902-68), winner of the Pulitzer Prize and the Nobel Prize for literature, is remembered as one of the greatest and best-loved American writers of the twentieth century. During the Second World War Steinbeck served as a war correspondent, with his collected dispatches published as Once There Was a War (1958); in 1945 he was awarded the Norwegian Cross of Freedom for his novel The Moon is Down (1942), a portrayal of Resistance efforts in northern Europe. His best-known works include the epics The Grapes of Wrath (1939) and East of Eden (1952), and his tragic novella Of Mice and Men (1937). John Steinbeck's complete works are published in Penguin Modern Classics. If you enjoyed Sweet Thursday, you might like Steinbeck's The Wayward Bus, also available in Penguin Classics. 'The outstanding quality of Steinbeck's writing ... is his feel for the lives, thoughts and aspirations of ordinary people'Spectator

Nobel Prize-winning author John Steinbeck is remembered as one of the greatest and best-loved American writers of the twentieth century. His complete works will be available in Penguin Modern Classics.

Description du livre Etat : New. The story takes place in Monterey, California, a small community where everyone knows everyone else. Doc is the local scientist who runs Western Biological Laboratory. He keeps himself busy to hide from his loneliness. Everyone in town knows Doc is not himself, and they all try to help in one way or another. Hazel, a bum who is known for his lack of thought, begins to contemplate ways to help Doc. The owner of the local gentleman's club, Fauna, tries to fix Doc up with Suzy, a new girl in town. N° de réf. du vendeur 9780140048896