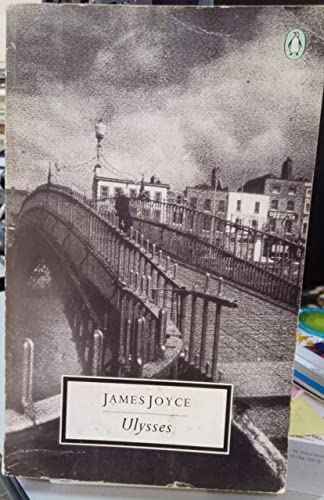 'one of the greatest novels of the twentieth century ... this edition, complete with an invaluable Introduction, map of Dublin, notes, and appendices, republishes for the first time, without interference, the original 1922 text.' In Dublin

'After more than seventy years of editorial corrections, specialists will buy the 'uncorrected' edition for its accuracy. Others should choose it as much for Johnson's excellent introduction and notes.' Tim Kendall. Hertford College, Oxford. Notes and Queries

For anyone coming to this 20th century classic for the first time, this paperback version could well make the going a little easier. (Lancashire Evening Post (Preston))

Already got a copy of Ulysses. Well, chuck it out and get this ... this is the one, a reproduction of the original 1922 Shakespeare & Co edition ... has extensive notes at the back to explain references and correct gaffes ... Also astonishingly cheap. (Nicholas Lezard, The Guardian)

now the cheapest annotated paperback available and comes with a splendid introduction from Jeri Johnson, a map of contemporary Dublin, and a comprehensive set of explanatory notes ... As such, it should appeal both to those who are familiar with Joyce's book, and those who are approaching it for the first time. (Yorkshire Post (Leeds))

hilarious, poignant, exhilarating ... The excellent guide, editor Jeri Johnson, refuses to allow short cuts for first-time travellers ... The detailed notes are useful ... the ideal way to set off on your personal odyssey. (The Times)

For anyone coming to this 20th century classic for the first time, this paperback version could well make the going a little easier. (West Lancashire Evening Gazette)

For anyone coming to this 20th Century classic for the first time, this paperback version could well make the going a little easier. (Yorkshire Evening Post (Leeds) Midweek section, 9 July 1997)

James Augustine Aloysius Joyce (2 February 1882 – 13 January 1941) was an Irish novelist and poet. He contributed to the modernist avant-garde, and is regarded as one of the most influential and important authors of the twentieth century. Joyce is best known for Ulysses (1922), a landmark work in which the episodes of Homer's Odyssey are paralleled in an array of contrasting literary styles, perhaps most prominent among these the stream of consciousness technique he utilized. Other well-known works are the short-story collection Dubliners (1914), and the novels A Portrait of the Artist as a Young Man (1916) and Finnegans Wake (1939). His other writings include three books of poetry, a play, occasional journalism, and his published letters. Joyce was born in 41 Brighton Square, Rathgar, Dublin—about half a mile from his mother's birthplace in Terenure—into a middle-class family on the way down. A brilliant student, he excelled at the Jesuit schools Clongowes and Belvedere, despite the chaotic family life imposed by his father's alcoholism and unpredictable finances. He went on to attend University College Dublin. In 1904, in his early twenties, Joyce emigrated permanently to continental Europe with his partner (and later wife) Nora Barnacle. They lived in Trieste, Paris, and Zurich. Though most of his adult life was spent abroad, Joyce's fictional universe centres on Dublin, and is populated largely by characters who closely resemble family members, enemies and friends from his time there. Ulysses in particular is set with precision in the streets and alleyways of the city. Shortly after the publication of Ulysses, he elucidated this preoccupation somewhat, saying, "For myself, I always write about Dublin, because if I can get to the heart of Dublin I can get to the heart of all the cities of the world. In the particular is contained the universal." from wikipedia

Description du livre -. Paperback. Etat : Very Good. Ulysses: Corrected Text (Twentieth Century Classics) This book is in very good condition and will be shipped within 24 hours of ordering. The cover may have some limited signs of wear but the pages are clean, intact and the spine remains undamaged. This book has clearly been well maintained and looked after thus far. Money back guarantee if you are not satisfied. See all our books here, order more than 1 book and get discounted shipping. N° de réf. du vendeur 7719-9780140181050

Description du livre Paperback. Etat : Very Good. The book has been read, but is in excellent condition. Pages are intact and not marred by notes or highlighting. The spine remains undamaged. N° de réf. du vendeur GOR000924947

Description du livre Paperback. Etat : Good. The book has been read but remains in clean condition. All pages are intact and the cover is intact. Some minor wear to the spine. N° de réf. du vendeur GOR001666810

Description du livre Paperback. Etat : Fair. A readable copy of the book which may include some defects such as highlighting and notes. Cover and pages may be creased and show discolouration. N° de réf. du vendeur GOR001256357