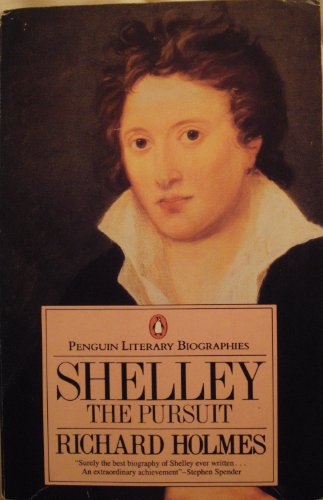 Shelley: The Pursuit is the book with which Richard Holmes—the finest literary biographer of our day—made his name. Dispensing with the long-established Victorian picture of Shelley as a blandly ethereal character, Holmes projects a startling image of "a darker and more earthly, crueler and more capable figure." Expelled from college, disowned by his aristocratic father, driven from England, Shelley led a life marked from its beginning to its early end by a violent rejection of society; he embraced rebellion and disgrace without thought of the cost to himself or to others. Here we have the real Shelley—radical agitator, atheist, apostle of free love, but above all a brilliant and uncompromising poetic innovator, whose life and work have proved an essential inspiration to poets as varied as W.B. Yeats and Allen Ginsberg.

Richard Holmes is the author of Shelley: The Pursuit (published by NYRB Classics), which won the Somerset Maugham Award in 1974; Coleridge: Early Visions, winner of the 1989 Whitbread Book of the Year award; Dr. Johnson & Mr. Savage, which won the 1993 James Tait Black Prize; and Coleridge: Darker Reflections, which won the 1990 Duff Cooper Prize and Heinemann Award. His other works include Footsteps (1985) and Sidetracks (2000). He is a Fellow of the Royal Society of Literature and was awarded the Order of the British Empire in 1992. He is also a professor of biographical studies at the University of East Anglia. He lives in London and Norwich with the novelist Rose Tremain.