Stiglitz, Joseph Globalization and Its Discontents.

Globalization and Its Discontents. 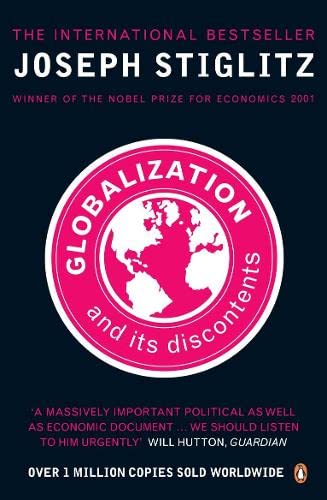 From Nobel laureate Joseph Stiglitz, Globalization and its Discontents is the bestselling exposé of the all-powerful organizations that control our lives. Our world is changing. Globalization is not working. It is hurting those it was meant to help. And now, the tide is turning... As chief economist at the world bank, Nobel Prize-winner Joseph Stiglitz had a unique insider's view into the management of globalization. Now he speaks out against it: how the IMF and WTO preach fair trade yet impose crippling economic policies on deveopling nations; how free market 'shock therapy' made millions in East Asia and Russia worse off than they were before; and how the West has driven the global agenda to further its own financial interests. Globalization can still be a force for good, Stiglitz argues. But the balance of power has to change. Here he offers real, tough solutions for the future. 'A massively important political as well as economic document ... we should listen to him urgently'
Will Hutton, Guardian 'Stiglitz is a rare breed, an heretical economist who has ruffled the self-satisfied global establishment that once fed him. Globalization and its Discontents declares war on the entire Washington financial and economic establishment'
Ian Fraser, Sunday Herald 'Gripping ... this landmark book shows him to be a worthy successor to Keynes'
Robin Blackburn, Independent Joseph Stiglitz is one of the world's best-known economists. He was Chief Economist at the World Bank until January 2000. Before that he was Chairman of President Clinton's Council of Economic Advisers. He is currently Professor of Finance and Economics at Columbia University. He won the Nobel Prize for Economics in 2001 and is the author of the bestselling Making Globalization Work, The Price of Inequality and The Roaring Nineties, all published by Penguin.

I have written this book because while I was at the World Bank, I saw first hand the devastating effect that globalization can have on developing countries, and especially the poor within those countries. I believe that globalization - the removal of barriers to free trade and the closer integration of national economies - can be a force for good and that it has the potential to enrich everyone in the world, particularly the poor. But I also believe that if this is to be the case, the way globalization has been managed, including the international trade agreements that have played such a large role in removing those barriers and the policies that have been imposed on developing countries in the process of globatization, need to be radically rethought.

1. Globalization and Its Discontents