Articles liés ŕ A Death in the Family

Agee, James A Death in the Family

A Death in the Family 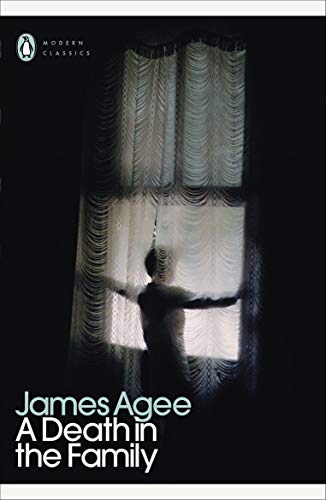 AT SUPPER THAT NIGHT, as many times before, his father said, “Well, spose we go to the picture show.”

“What’s wrong with him?” his father asked, not because he didn’t know what she would say, but so she would say it.

“He’s so nasty!” she said, as she always did. “So vulgar! With his nasty little cane; hooking up skirts and things, and that nasty little walk!”

His father laughed, as he always did, and Rufus felt that it had become rather an empty joke; but as always the laughter also cheered him; he felt that the laughter enclosed him with his father.

It was full dark now, but still early; Gay Street was full of absorbed faces; many of the store windows were still alight. Plaster people, in ennobled postures, stiffly wore untouchably new clothes; there was even a little boy, with short, straight pants, bare knees and high socks, obviously a sissy: but he wore a cap, all the same, not a hat like a baby. Rufus’ whole insides lifted and sank as he looked at the cap and he looked up at his father; but his father did not notice; his face was wrapped in good humor, the memory of Charlie. Remembering his rebuff of a year ago, even though it had been his mother, Rufus was afraid to speak of it. His father wouldn’t mind, but she wouldn’t want him to have a cap, yet. If he asked his father now, his father would say no, Charlie Chaplin was enough. He watched the absorbed faces pushing past each other and the great bright letters of the signs: “Sterchi’s.” “George’s.” I can read them now, he reflected. I even know how to say “Sturkeys.” But he thought it best not to say so; he remembered how his father had said, “Don’t you brag,” and he had been puzzled and rather stupid in school for several days, because of the stern tone in his voice.

What was bragging? It was bad.

They turned aside into a darker street, where the fewer faces looked more secret, and came into the odd, shaky light of Market Square. It was almost empty at this hour, but here and there, along the pavement streaked with horse urine, a wagon stayed still, and low firelight shone through the white cloth shell stretched tightly on its hickory hoops. A dark-faced man leaned against the white brick wall, gnawing a turnip; he looked at them low, with sad, pale eyes. When Rufus’ father raised his hand in silent greeting, he raised his hand, but less, and Rufus, turning, saw how he looked sorrowfully, somehow dangerously, after them. They passed a wagon in which a lantern burned low orange; there lay a whole family, large and small, silent, asleep. In the tail of one wagon a woman sat, her face narrow beneath her flare of sunbonnet, her dark eyes in its shade, like smudges of soot. Rufus’ father averted his eyes and touched his straw hat lightly; and Rufus, looking back, saw how her dead eyes kept looking gently ahead of her.

“Well,” his father said, “reckon I’ll hoist me a couple.”

They turned through the swinging doors into a blast of odor and sound. There was no music: only the density of bodies and of the smell of a market bar, of beer, whiskey and country bodies, salt and leather; no clamor, only the thick quietude of crumpled talk. Rufus stood looking at the light on a damp spittoon and he heard his father ask for whiskey, and knew he was looking up and down the bar for men he might know. But they seldom came from so far away as the Powell River Valley; and Rufus soon realized that his father had found, tonight, no one he knew. He looked up his father’s length and watched him bend backwards tossing one off in one jolt in a lordly manner, and a moment later heard him say to the man next him, “That’s my boy”; and felt a warmth of love. Next moment he felt his father’s hands under his armpits, and he was lifted, high, and seated on the bar, looking into a long row of huge bristling and bearded red faces. The eyes of the men nearest him were interested, and kind; some of them smiled; further away, the eyes were impersonal and questioning, but now even some of these began to smile. Somewhat timidly, but feeling assured that his father was proud of him and that he was liked, and liked these men, he smiled back; and suddenly many of the men laughed. He was disconcerted by their laughter and lost his smile a moment; then, realizing it was friendly, smiled again; and again they laughed. His father smiled at him. “That’s my boy,” he said warmly. “Six years old, and he can already read like I couldn’t read when I was twice his age.”

Rufus felt a sudden hollowness in his voice, and all along the bar, and in his own heart. But how does he fight, he thought. You don’t brag about smartness if your son is brave. He felt the anguish of shame, but his father did not seem to notice, except that as suddenly as he had lifted him up to the bar, he gently lifted him down again. “Reckon I’ll have another,” he said, and drank it more slowly; then, with a few good nights, they went out.

His father proffered a Life Saver, courteously, man to man; he took it with a special sense of courtesy. It sealed their contract. Only once had his father felt it necessary to say to him, “I wouldn’t tell your mama, if I were you”; he had known, from then on, that he could trust Rufus; and Rufus had felt gratitude in this silent trust. They walked away from Market Square, along a dark and nearly empty street, sucking their Life Savers; and Rufus’ father reflected, without particular concern, that Life Savers were not quite life saver enough; he had better play very tired tonight, and turn away the minute they got in bed.

The deaf and dumb asylum was deaf and dumb, his father observed very quietly, as if he were careful not to wake it, as he always did on these evenings; its windows showed black in its pale brick, as the nursing woman’s eyes, and it stood deep and silent among the light shadows of its trees. Ahead, Asylum Avenue lay bleak beneath its lamps. Latticed in pawnshop iron, an old saber caught the glint of a street lamp, a mandolin’s belly glowed. In a closed drug store stood Venus de Milo, her golden body laced in elastic straps. The stained glass of the L&N Depot smoldered like an exhausted butterfly, and at the middle of the viaduct they paused to inhale the burst of smoke from a switch engine which passed under; Rufus, lifted, the cinders stinging his face, was grateful no longer to feel fear at this suspension over the tracks and the powerful locomotives. Far down the yard, a red light flicked to green; a moment later, they heard the thrilling click. It was ten-seven by the depot clock. They went on, more idly than before.

If I could fight, thought Rufus. If I were brave; he would never brag how I could read: Brag. Of course, “Don’t you brag.” That was it. What it meant. Don’t brag you’re smart if you’re not brave. You’ve got nothing to brag about. Don’t you brag.

The young leaves of Forest Avenue wavered against street lamps and they approached their corner.

"[James Agee's words] are so indelibly etched someplace inside of me that I couldn't reach to rub them out even if I wanted to. And I never want to." —Steve Earle, from the Introduction

"The work of a writer whose power with English words can make you gasp." —Alfred Kazin, The New York Times Book Review

“A Death in the Family remains one of the most beautifully written of all American novels. James Agee’s talent was both luxuriant and precise, and the opening sequence is still one of the finest prose poems in our language. He is one of those writers who cause other writers to shiver with pure pleasure.” —Pat Conroy

“People I know who read A Death in the Family forty years ago still talk about it. So do I. It is a great book, and I’m happy to see it done anew.” —Andre Dubus

“For as long as fiction is read, James Agee’s A Death in the Family stands as an American masterpiece. There is no stronger, more moving document in our literature than this account of a father’s sudden death in the early years of our century. Here are the full spectrum of emotion and resonance, the tensile, perfectly nuanced language, the prayerful inquiry into identity itself, and characters so perfectly rounded that they exist in every specificity of inquiry, acute awareness, dumb love, and sensual arrest. This book has been my Bible; may it bless new generations of readers.” —Jayne Anne Phillips

1. A Death in the Family

2. A Death in the Family

3. Death in the Family

4. A Death in the Family

5. A Death in the Family

Description du livre Penguin Books Ltd. Paperback / softback. Etat : New. New copy - Usually dispatched within 3 working days. On a sultry summer night in 1915, Jay Follet leaves his house in Knoxville, Tennessee, to tend to his father, who he believes is dying. The summons turns out to be a false alarm, but on his way back to his family, Jay has a car accident and is killed instantly. N° de réf. du vendeur B9780141187969

6. A Death in the Family

7. A Death in the Family (Penguin Modern Classics) (Paperback)

8. A Death in the Family

9. A Death in the Family (Paperback)

Description du livre 2006. Paperback. Etat : New. Paperback. On a sultry summer night in 1915, Jay Follet leaves his house in Knoxville, Tennessee, to tend to his father, whom he believes is dying. The summons turns out to be a false al.Shipping may be from our Sydney, NSW warehouse or from our UK or US warehouse, depending on stock availability. 336 pages. 0.247. N° de réf. du vendeur 9780141187969