L'Engle, Madeleine A Wrinkle in Time

A Wrinkle in Time 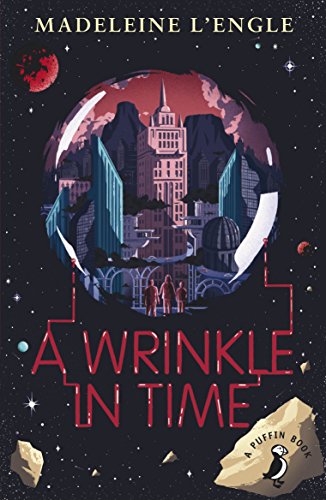 A Wrinkle in Time was written before any human had walked on the moon or sent rovers to Mars. It was a time before cell phones and personal computers, before digital cameras, CDs, and DVDs, before the fiction of Star Trek, Star Wars, and The Matrix, and before the realities of the space shuttle, the Mir space station, and the International Space Station. Science has changed dramatically as generations of children and adults have read the book since it was first published in 1962. Those scientific advances make Madeleine L’Engle’s story even more compelling.
The author of A Wrinkle in Time is a tall woman who sometimes wears a purple cape. She will tell you that she is completely made of stardust and always has been. No kidding. “You are made of stardust, too,” she will add with a twinkle in her eye.
This is not the wild imagination of a creative writer’s mind. We are all made of stardust. Our little molecules are the leftovers of big stars that exploded eons ago. Mrs. Whatsit may be a fanciful character who gave up her life as a star to fight the darkness, but we are real creatures who really are made of the cosmic dust of supernovas. When giant stars explode, they send their matter out into the universe and enrich all the yet-to-be-born stars and planets with the chemical ingredients that make up life as we know it. Astrophysicist Dr. Neil deGrasse Tyson says, “It’s a profound, underappreciated truth.”
Stardust is just one way that Madeleine L’Engle mixes fact and fantasy to inspire you to want to know more about science. With knowledge come more questions. With imagination comes more curiosity. With searching comes more truth. That blend is a specialty of L’Engle’s.
Meg, Charles Wallace, and Calvin visit different planets outside our solar system. When A Wrinkle in Time was first printed in 1962, scientists could confirm the existence of only nine planets–all of them orbiting our sun. Since 1995, astronomers have been finding planets at an average rate of one a month–all outside our solar system.
Throughout A Wrinkle in Time, the universe is in a struggle with the Black Thing. L’Engle wrote of the Black Thing before astronomers found black holes, which suck up everything around them, and long before scientists announced that almost all of our universe is composed of invisible “dark matter” and “dark energy,” which science knows almost nothing about.
In the thin atmosphere of Uriel, Meg has to breathe from a flower to stay alive. In reality, we all breathe plants to stay alive. NASA conducts experiments to see how plants could help keep astronauts alive when they travel in space and live on other planets.
In A Wrinkle in Time, we meet thinking aliens in outer space, including Aunt Beast, the Man with Red Eyes, and Mrs. Who. Since 1962, explorers have gone to remote spots on our planet, studying “extremophile” life to learn more about what life out there in space might really be like.
Meg, Charles Wallace, and Calvin travel through multiple dimensions. When A Wrinkle in Time first appeared, science recognized only four dimensions–three of space and one of time. Now mathematicians claim that at least nine spatial dimensions are needed to explain our physical world–maybe ten. Maybe more.
Just looking at how technology and science have changed since Meg’s first adventure was printed is a kind of time travel in your mind that shows how much science and math have grown, and how much they still need to grow. When Meg’s father urges her to name the elements of the periodic table to escape the dark forces of IT, she begins reciting, “Hydrogen, Helium, Lithium, Beryllium, Boron, Carbon, Nitrogen, Oxygen, Fluorine . . .” and continues. Only 103 elements were known in 1962. In 2004, to finish reciting the elements on the periodic table, Meg would need to add more tongue-twisters, such as rutherfordium, meitnerium, darmstadtium, and roentgenium (element number 111). New elements are still being discovered, created, and debated.
Scientists and astronauts are delving further into the tiny world of microorganisms that Meg’s mother studied, and further into the giant realms that Meg’s father traveled in. Since 1962, scientists have discovered quarks and quasars, things smaller and bigger than ever known before–smaller than a proton in an atom and larger than a galaxy. What next?
“Students can get so bombarded in science classes and think that all is known. It’s not. A book like this can help them realize that we know some things, but really very, very little. And maybe a lot of what we know now is not right!” says Shannon Lucid, a science fiction reader and astronaut who has spent more time in space than any other woman. There are still big unanswered questions and great quests yet to begin.
For Madeleine L’Engle, every good story and every good life is a search for answers through fiction, fact, and spirit. The poet, the physicist, and the prophet are all searching to understand the dimensions we can’t see, whether gravity, time, or love. A Wrinkle in Time is a great journey through dimensions–a journey of exploration and discovery, curiosity and awe.

From A Wrinkle In TIme
"Now, don't be frightened, loves," Mrs. Whatsit said. Her plump little body began to shimmer, to quiver, to shift. The wild colors of her clothes became muted, whitened. The pudding-bag shape stretched, lengthened, merged. And suddenly before the children was a creature more beautiful than any Meg had even imagined, and the beauty lay in far more than the outward description. Outwardly Mrs. Whatsit was surely no longer a Mrs. Whatsit. She was a marble-white body with powerful flanks, something like a horse but at the same time completely unlike a horse, for from the magnificently modeled back sprang a nobly formed torso, arms, and a head resembling a man's, but a man with a perfection of dignity and virtue, an exaltation of joy such as Meg had never before seen. No, she thought, it's not like a Greek centaur. Not in the least.

From the shoulders slowly a pair of wings unfolded, wings made of rainbows, of light upon water, of poetry.

Calvin fell to his knees.

"No," Mrs. Whatsit said, though her voice was not Mrs. Whatsit's voice. "Not to me, Calvin. Never to me. Stand up."

With a gesture both delicate and strong Mrs. Whatsit knelt in front of the children, stretching her wings wide and holding them steady, but quivering. "Onto my back, now," the new voice said.

The children took hesitant steps toward the beautiful creature.
From the Paperback edition.

A Puffin Book - stories that last a lifetime.Puffin Modern Classics are relaunched under a new logo: A Puffin Book. There are 20 titles to collect in the series, listed below, all with exciting new covers and fun-filled endnotes.A WRINKLE IN TIME is a classic sci-fi adventure for children by bestselling US author, Madeleine L'Engle.When Charles Wallace Murry goes searching through a 'wrinkle in time' for his lost father, he finds himself on an evil planet where all life is enslaved by a huge pulsating brain known as 'It'. How Charles, his sister Meg and friend Calvin find and free his father makes this a very special and exciting mixture of fantasy and science fiction, which all the way through is dominated by the funny and mysterious trio of guardian angels known as Mrs Whatsit, Mrs Who and Mrs Which.Madeleine L'Engle lived in New York and wrote over 60 books for children, including A WRINKLE IN TIME, the first in her Time Quintet series and winner of the highly prestigious Newbury Medal. she died in 2007, aged 88.Also available in A Puffin Book: GOODNIGHT MISTER TOM and BACK HOME by Michelle Magorian CHARLOTTE'S WEB, STUART LITTLE and THE TRUMPET OF THE SWAN by E. B. White THE BORROWERS by Mary NortonSTIG OF THE DUMP by Clive KingROLL OF THUNDER, HEAR MY CRY by Mildred D. TaylorA DOG SO SMALL by Philippa PearceGOBBOLINO by Ursula Moray WilliamsCARRIE'S WAR by Nina BawdenMRS FRISBY AND THE RATS OF NIMH by Richard C O'BrienA WRINKLE IN TIME by Madeleine L'EngleTHE CAY by Theodore TaylorTARKA THE OTTER by Henry WilliamsonWATERSHIP DOWN by Richard AdamsSMITH by Leon GarfieldTHE NEVERENDING STORY by Michael EndeANNIE by Thomas MeehanTHE FAMILY FROM ONE END STREET by Eve Garnett

2. A Wrinkle in Time

4. A Wrinkle in Time

5. A Wrinkle In Time