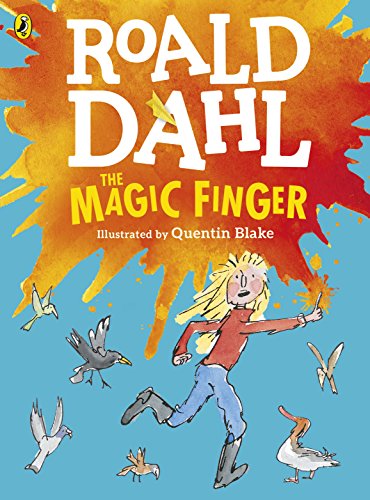 The Magic Finger by Roald Dahl is the story of little Lucy and the bad Greggs family. . . The Magic Finger is something I've been able to do all my life. I can't tell you just how I do it, because I don't even know myself. But it always happens when I get cross . . . and suddenly a sort of flash comes out of me, a quick flash, like something electric. It jumps out and touches the person who has made me cross . . . "A true genius . . . Roald Dahl is my hero" David Walliams Roald Dahl, the best-loved of children's writers, was born in Wales of Norwegian parents. After school in England he went to work for Shell in Africa. He began to write after "a monumental bash on the head", sustained as an RAF pilot in World War II. Roald Dahl died in 1990. Quentin Blake is one of the best-known and best-loved children's illustrators and it's impossible now to think of Roald Dahl's writings without imagining Quentin Blake's illustrations.

Roald Dahl (Author) Sitting in a hut at the bottom of his garden, surrounded by odd bits and pieces such as a suitcase (used as a footrest), his own hipbone (which he'd had replaced) and a heavy ball of metal foil (made from years' worth of chocolate wrappers), Roald Dahl wrote some of the world's best-loved stories including Charlie and the Chocolate Factory, The Twits, The Witches, The BFG, Fantastic Mr Fox, James and the Giant Peach and lots more. Quentin Blake (Illustrator) Quentin Blake is one of Britain's most successful illustrators. He has illustrated nearly three hundred books and he was Roald Dahl's favourite illustrator. He has won many awards including the Whitbread Award and the Kate Greenaway Medal and taught for over twenty years at the Royal College of Art. In 1999 he became the first ever Children's Laureate and in 2013 he was knighted in the New Year's Honours.