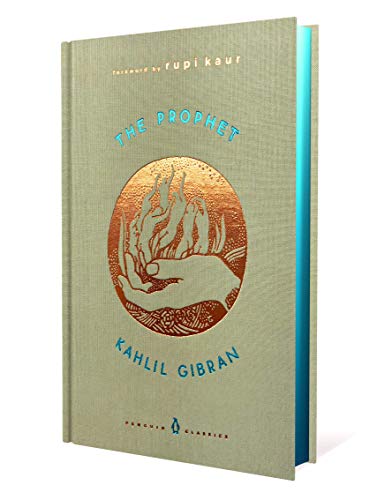 Almustafa, the chosen and the beloved, who was a dawn unto his own day, had waited twelve years in the city of Orphalese for his ship that was to return and bear him back to the isle of his birth.

And in the twelfth year, on the seventh day of Ielool, the month of reaping, he climbed the hill without the city walls and looked seaward; and he beheld his ship coming with the mist.

Then the gates of his heart were flung open, and his joy flew far over the sea. And he closed his eyes and prayed in the silences of his soul.

But as he descended the hill, a sadness came upon him, and he thought in his heart:

How shall I go in peace and without sorrow? Nay, not without a wound in the spirit shall I leave this city.

Long were the days of pain I have spent within its walls, and long were the nights of aloneness; and who can depart from his pain and his aloneness without regret?

Too many fragments of the spirit have I scattered inthese streets, and too many are the children of my longingthat walk naked among these hills, and I cannot withdraw from them without a burden and an ache.

It is not a garment I cast off this day, but a skin that I tear with my own hands.

Nor is it a thought I leave behind me, but a heart made sweet with hunger and with thirst.
Yet I cannot tarry longer.

The sea that calls all things unto her calls me, and I must embark.

For, to stay, though the hours burn in the night, is to freeze and crystallize and be bound in a mould.

Fain would I take with me all that is here. But how shall I?

A voice cannot carry the tongue and the lips that gave it wings. Alone must it seek the ether.

And alone and without his nest shall the eagle flyacross the sun.

Now when he reached the foot of the hill, he turnedagain towards the sea, and he saw his ship approachingthe harbour, and upon her prow the mariners, themen of his own land.

And his soul cried out to them, and he said:

Sons of my ancient mother, you riders of the tides,

How often have you sailed in my dreams. And now you come in my awakening, which is my deeper dream.

Ready am I to go, and my eagerness with sails fullset awaits the wind.

Only another breath will I breathe in this still air, only another loving look cast backward,

And then I shall stand among you, a seafareramong seafarers.

And you, vast sea, sleepless mother,

Who alone are peace and freedom to the river and the stream,

Only another winding will this stream make, only another murmur in this glade,

And then shall I come to you, a boundless drop toa boundless ocean.
And as he walked he saw from afar men and women leaving their fields and their vineyards and hastening towards the city gates.

And he heard their voices calling his name, and shouting from field to field telling one another of the coming of his ship.

And he said to himself:

And shall it be said that my eve was in truth my dawn?

Shall my heart become a tree heavy-laden with fruit that I may gather and give unto them?

And shall my desires flow like a fountain that I may fill their cups?

Am I a harp that the hand of the mighty may touch me, or a flute that his breath may pass through me?

A seeker of silences am I, and what treasure have I found in silences that I may dispense with confidence?

If this is my day of harvest, in what fields have I sowed the seed, and in what unremembered seasons?

If this indeed be the hour in which I lift up my lantern, it is not my flame that shall burn therein.

Empty and dark shall I raise my lantern,

And the guardian of the night shall fill it with oil and he shall light it also.

These things he said in words. But much in his heart remained unsaid. For he himself could not speak his deeper secret.
And when he entered into the city all the people came to meet him, and they were crying out to him as with one voice.

And the elders of the city stood forth and said:

Go not yet away from us.

A noontide have you been in our twilight, and your youth has given us dreams to dream.

No stranger are you among us, nor a guest, but our son and our dearly beloved.

Suffer not yet our eyes to hunger for your face.
And the priests and the priestesses said unto him:

Let not the waves of the sea separate us now, and the years you have spent in our midst become a memory.

You have walked among us a spirit, and yourshadow has been a light upon our faces.Much have we loved you. But speechless was ourlove, and with veils has it been veiled.Yet now it cries aloud unto you, and would standrevealed before you.

And ever has it been that love knows not its own depth until the hour of separation.
And others came also and entreated him. But he answered them not. He only bent his head; and those who stood near saw his tears falling upon his breast.

And he and the people proceeded towards the great square before the temple.
And there came out of the sanctuary a woman whose name was Almitra. And she was a seeress.

And he looked upon her with exceeding tenderness, for it was she who had first sought and believed in him when he had been but a day in their city.

And she hailed him, saying:

Prophet of God, in quest of the uttermost, long have you searched the distances for your ship.

And now your ship has come, and you must needs go.

Deep is your longing for the land of your memories and the dwelling place of your greater desires; and our love would not bind you nor our needs hold you.

Yet this we ask ere you leave us, that you speak tous and give us of your truth.

In your aloneness you have watched with our days, and in your wakefulness you have listened to the weeping and the laughter of our sleep.

Now therefore disclose us to ourselves, and tell us all that has been shown you of that which is between birth and death.

People of Orphalese, of what can I speak save ofthat which is even now moving within your souls?

“This book cracked my heart wide open. And I think it’s going to do the same to yours. . . . I’ve read The Prophet more times than I can count. I’ve owned and given away dozens of copies. I have one packed permanently in my travel bag. . . . The Prophet, and the man behind it, freed the poet in me. . . . Almost a hundred years later, it still feels as fresh and as relevant as ever. Why have I read it dozens of times? Because it doesn’t feel like reading. It feels like listening to my favorite song. . . . [Kahlil Gibran] is the conductor, the words are his orchestra, and he makes them dance off the page and land softly in your belly. . . . This book is not just for poetry lovers. It is for anyone wondering what this thing we call life is about. [It is] an anchor, a lifeline, and a friend.” —Rupi Kaur, from the Foreword

“Cadenced and vibrant with feeling, the words of Kahlil Gibran bring to one’s ears the majestic rhythm of Ecclesiastes. . . . If there is a man or woman who can read this book without a quiet acceptance of a great man’s philosophy and a singing in the heart as of music born within, that man or woman is indeed dead to life and truth.” —Chicago Post

“Like most wisdom, most of what [Kahlil Gibran] has to tell is ancient, the possession of all men who have thought much and hard about fundamental things. . . . But on it all there is also the imprint of a rich and unusual personality. . . . Gibran offers no short-cuts to happiness, no easily mastered formulae for successful living. Essentially, he bids you look closely into your own heart and mind.” —The New York Times

1. The Prophet (A Penguin Classics Hardcover)

2. The Prophet (A Penguin Classics Hardcover)

3. The Prophet (Hardback or Cased Book)

4. The Prophet (A Penguin Classics Hardcover)

Description du livre Penguin Books Ltd, United Kingdom, 2020. Hardback. Etat : New. 2nd. Language: English. Brand new Book. A hugely influential philosophical work of prose poetry, Kahlil Gibran's The Prophet is an inspirational, allegorical guide to livingFirst published in the 1920's, The Prophet is perhaps the most famous work of religious fiction of the twentieth century, and has sold millions of copies in more than twenty languages. Gibran's Prophet speaks of many things central to daily life: love, marriage, death, beauty, passion, eating, work and play. The spiritual message he imparts, of finding divinity through love, blends eastern mysticism, religious faith and philosophy with simple advice. The Prophet became the bible of 1960s culture and was credited with founding the New Age movement, yet it still continues to inspire people around the world today. This edition is illustrated with Gibran's famous visionary paintings.'His work goes on from generation to generation'Daily Mail'To read it was to transcend ordinary levels of perception, to become aware . of a more intense level of being'Independent. N° de réf. du vendeur CIL9780143133582

6. The Prophet (A Penguin Classics Hardcover)

7. The Prophet (A Penguin Classics Hardcover)

8. The Prophet (A Penguin Classics Hardcover)

9. The Prophet (A Penguin Classics Hardcover)

10. The Prophet (A Penguin Classics Hardcover)