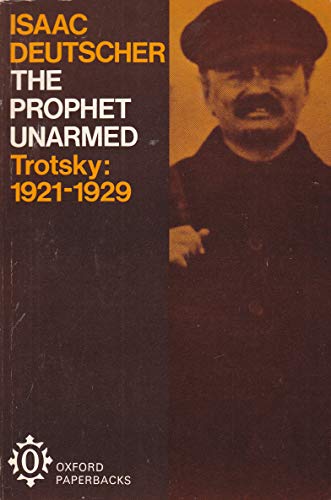 “In the 1930s, Trotsky, with a handful of followers, attempted to block the path of Stalin’s relentless hurricane of betrayal and murder. His epic defence of the soul of the Revolution against its bureaucratic executioners was a torchlight in the storm. In one of the very greatest modern biographies, Isaac Deutscher redeems the legacy of this astonishing revolutionary and humanist thinker.”—Mike Davis

“The three volumes of Isaac Deutscher’s life of Trotsky ... were for me the most exciting reading of the year. Surely this must be counted among the greatest biographies in the English language.”—Graham Greene

“He has told the story more accurately and with fuller detail than ever before ... .compulsory reading for anyone interested in the history of Soviet Russia.”—A.J.P Taylor, New Statesman

“He has told the story more accurately and with fuller detail than ever before. His book is compulsory reading for anyone interested in the history of Soviet Russia and of international communism.”—A. J. P. Taylor

“This is the critical voice the velvet revolution faded out. The republication of Deutscher’s classic trilogy is good news for a new generation who want to know what went wrong with communist-style socialism.”—Sheila Rowbotham

“Deutscher is an exceedingly vivid writer with a sense of style, and a warm and understanding sympathy for his hero: this makes him a first rate biographer.”—Times Literary Supplement

Few political figures of the twentieth century have aroused as much controversy as the Russian revolutionary Leon Trotsky. Trotsky’s extraordinary life and extensive writings have left an indelible mark on revolutionary conscience, yet there was a danger that his name would disappear from history. Originally published in 1954, Deutscher’s magisterial three-volume biography was the first major publication to counter the powerful Stalinist propaganda machine. In this definitive biography Trotsky emerges in his real stature, as the most heroic, and ultimately tragic, character of the Russian Revolution.

This second volume of the trilogy, first published in 1959, is a self-contained account of the great struggle between Stalin and Trotsky that followed the end of the civil war in Russia in 1921 and the death of Lenin. From the narrative of Trostsky’s uncompromising opposition to Stalin’s policies emerge character studies of the important Soviet leaders; a brilliant portrait of Trotsky the man of ideas, the Marxist philosopher and literary critic; and a new assessment of the causes of defeat which led to his expulsion from the party, his exile, and his banishment from Russia.

Description du livre Paperback. Etat : Good. Cover is discolored. Book shows common (average) signs of wear and use. Binding is still tight. Covers are intact but may be repaired. We have 500,000 books to choose from -- Ship within 24 hours -- Satisfaction Guaranteed!. N° de réf. du vendeur mon0000874127

Description du livre Etat : Good. This is an ex-library book and may have the usual library/used-book markings inside.This book has soft covers. In good all round condition. Please note the Image in this listing is a stock photo and may not match the covers of the actual item,550grams, ISBN:0192810650. N° de réf. du vendeur 9603273

Description du livre Etat : Good. This is an ex-library book and may have the usual library/used-book markings inside.This book has hardback covers. In good all round condition. No dust jacket. Please note the Image in this listing is a stock photo and may not match the covers of the actual item,700grams, ISBN:0192810650. N° de réf. du vendeur 9178894

Description du livre Paperback. Etat : Good. Item is in good condition. Some moderate creases and wear. This item may not come with CDs or additional parts including access codes for textbooks. Might be an ex-library copy and contain writing/highlighting. Photos are stock pictures and not of the actual item. N° de réf. du vendeur DS-0192810650-3

Description du livre Etat : Good. A+ Customer service! Satisfaction Guaranteed! Book is in Used-Good condition. Pages and cover are clean and intact. Used items may not include supplementary materials such as CDs or access codes. May show signs of minor shelf wear and contain limited notes and highlighting. N° de réf. du vendeur 0192810650-2-4