Irish Writing: An Anthology of Irish Literature in English 1789-1939

Irish Writing: An Anthology of Irish Literature in English 1789-1939 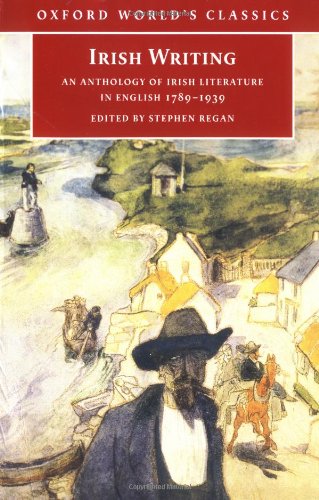 'Can we not build up a national tradition, a national literature, which shall be none the less Irish in spirit from being English in language?' W. B. Yeats This anthology traces the history of modern Irish literature from the revolutionary era of the late eighteenth century to the early years of political independence. From Charlotte Brooke and Edmund Burke to Elizabeth Bowen and Louis MacNeice, the anthology shows how, in forging a tradition of their own, Irish writers have continually challenged and renewed the ways in which Ireland is imagined and defined. The anthology includes a wide-ranging and generous selection of fiction, poetry, and drama. Three plays by W. B. Yeats, Augusta Gregory, and J. M. Synge are printed in their entirety, along with the opening episode of James Joyce's Ulysses. The volume also includes letters, speeches, songs, memoirs, essays, and travel writings, many of which are difficult to obtain elsewhere. 'Stephen Regan's anthology vividly and valiantly presents a nation, and a national literature, coming into being.' Paul Muldoon ABOUT THE SERIES: For over 100 years Oxford World's Classics has made available the widest range of literature from around the globe. Each affordable volume reflects Oxford's commitment to scholarship, providing the most accurate text plus a wealth of other valuable features, including expert introductions by leading authorities, helpful notes to clarify the text, up-to-date bibliographies for further study, and much more.