Articles liés ŕ The Voice of the Past: Oral History

Thompson, Paul The Voice of the Past: Oral History

The Voice of the Past: Oral History 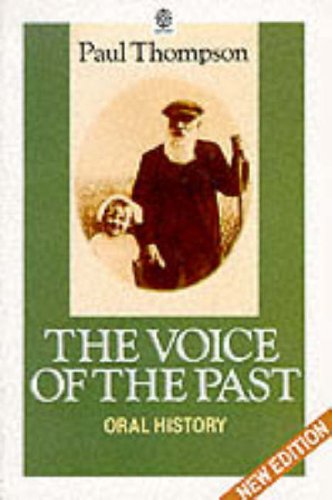 In this revised edition of Paul Thompson's successful book, he traces oral history through its own past and weighs up the recent achievements of this international movement. He challenges myths of historical scholarship and looks at the use of oral sources by the historian. The author offers advice on designing a project; discusses reliability of oral evidence; considers the context of the development of historical writing including it's social function.; and looks at memory, the self and the use of drama and therapy. This new edition has been substantially revised and updated and includes an expanded discussion of narrative approaches and new technology used in the recording of information. Reviews from the second edition of Voice of the Past: Oral History 'Paul Thompson is a passionate and convincing crusader in the cause of oral history' The Times Educational Supplement 'It must be rare in modern academic life to replace your own unrivalled book after 10 years with an even better one, but he has done so. His new material on memory and the self, and on drama as therapy, should be read by literary critics in their infancy.' The Independent '...the first book to combine a theory of oral history, the technical processes involved, and a road map of where oral evidence fits into the landscape of western historiography.' American Historical Review

The Voice of the Past's success is a testament to a broader appeal- not only scholars and students, but museum curators, community and local historians, genealogists, indeed anyone interested in the past.. In the survey of work in the field, Thompson extends his prodigious capacity for sythesising a huge range of the sources available around the world, drawing from many different case studies to make his points. (Paula Hamilton, Oral History Journal, 28/02, Winter 2000; 103.)

The Voice of the Past: Oral History Thompson, Paul