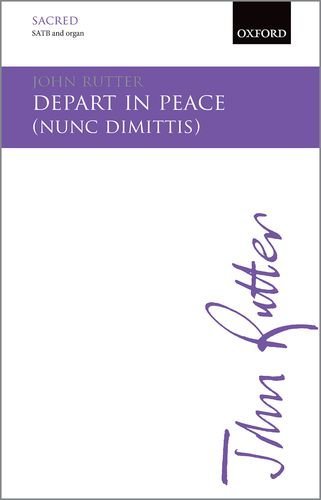 John Rutter was born in London in 1945 and studied music at Clare College, Cambridge. His compositions embrace choral, orchestral, and instrumental music, and he has edited or co-edited various choral anthologies, including four Carols for Choirs volumes with Sir David Willcocks and the Oxford Choral Classics series. From 1975 to 1979 he was Director of Music at Clare College, and in 1981 he formed his own choir, the Cambridge Singers. He now divides his time between composition and conducting and is sought after as a guest conductor for the world's leading choirs and orchestras. John Rutter's music has been widely recorded and is available on many record labels including Universal, Naxos, and Hyperion. The Cambridge Singers have recorded many of John Rutter's works on the Collegium Records label.

for SATB and organ Rutter composed this elegant setting of the Evensong canticle Nunc Dimittis in homage to and in the style of composer Sir Charles Villiers Stanford, whose own Magnificat and Nunc Dimittis settings are staples of the English sacred choral repertoire. An accompanying setting of the Magnificat (My Soul Doth Magnify The Lord) is also available from Oxford University Press.