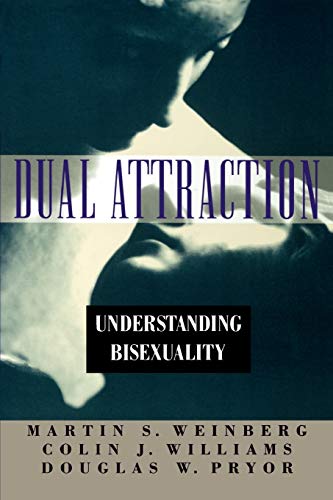 For the past two generations, extensive research has been conducted on the determinants of homosexuality. But, until now, scant attention has been paid to what is perhaps the most mysterious--and potentially illuminating--variation of human sexual expression, bisexuality. Today, as ignorance and fear of AIDS makes greater awareness of all forms of sexual behavior an urgent matter of private and public consequence, leading sex researchers Martin Weinberg, Colin Williams, and Douglas Pryor provide us with the first major study of bisexuality. Weinberg, Williams, and Pryor explore the riddle of dual attraction in their study of 800 residents of San Francisco. Fieldwork, intensive interviews, and surveys provided a wealth of data about the nature of bisexual attraction, the steps that lead people to become bisexual, and how sexual preference can change over time. They found that heterosexuals, more often than homosexuals, become bisexual; that bisexual men and women differ markedly in their sexual behavior and romantic feelings; that most bisexuals ultimately settle into long-term relationships while continuing sexual activity outside those relationships; and they also explain why transsexuals often become bisexual. Moreover, the authors discovered that as the AIDS crisis unfolded, many bisexual men entered into monogamous relationships with women, and bisexual women into more lesbian relationships. Recent media accounts attest that a growing number of researchers and writers are narrowing the fundamental cause of sexual preference to a single factor, biology. But if, as this study shows, learning plays a significant part in helping people traverse the boundaries of gender, if past and present intimate relationships influence their changing preferences, and if bisexual activity is inseparable from a social environment which provides distinctive sexual opportunities, then a mosaic of factors far more complex than those previously considered must be entertained in explaining the fuller spectrum of sexual preferences. Dual Attraction is one of the most significant contributions to our understanding of sexuality since the original Kinsey reports and Bell and Weinberg's 1978 international bestseller, Homosexualities. It is must reading for all those interested in the study of sexual behavior--especially now, since the onset of AIDS.

The writing is sensible and unspecialised. Dual Attraction contributes substantially to the current tendency to assert the credibility of bisexuality. (Gay Times)

Examines the interaction of sexual behaviors and social identities as well as the emotional dimensions of sexual preference. Such a focus locates sex in a web of intimate relationships, which permits the uncovering of how people's sexual preferences change. (Feminist Collections)