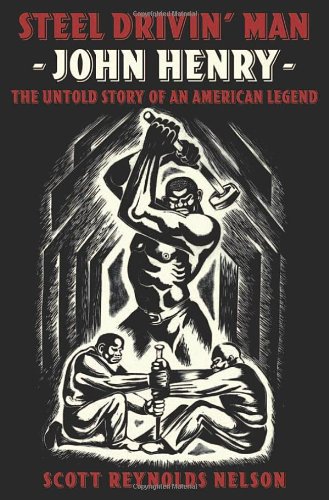 In this compelling and consistently engaging narrative, Nelson reveals as much about the cultural politics of the twentieth century as he does about race, railroads, and Reconstruction in the nineteenth. (John C. Inscoe, The Journal of Southern History)

In telling the story of a man, a myth, and history wrapped up together, Nelson's created a page-turning historical detective story. (Jeffery R. Lindholm, Dirty Linen)

Nelson is a magnificent writer, and he tells a story as great and terrible as any... Steel Drivin' Man is a rarity among history books in that it is a concise one. It's like John Henry: It's short, and it does its job well. (Atlanta Journal-Constitution)

Over the last century, the legend of macho steelworker John Henry with his 'two twenty pound hammers' has been appropriated by chain gangs, Communist radicals, and Johnny Cash. The real Henry, usually envisioned as a bulky strongman, was in fact a 5' 1'' convict from Elizabeth, N.J., as Scott Reynolds Nelson shows in his slim, meticulously researched[book]. He sifts through prison records, railroad progress reports, and census data (as well as songs and art)

Written at the crossroads where American myth and reality intersect, Steel Drivin' Man is a tribute and requiem to the real steel drivin' men who built this country. (Bruce Springsteen)

What Mr. Nelson proves is the undying power of the John Henry myth, which reduces almost to a pinpoint the historical figure he resurrects from the archives. Whether or not John William Henry is the man seems almost irrelevant. He is a fascinating guide to the world of Southern railroads and the grim landscape of Reconstruction. (William Grimes, The New York Times)

Readers will find his imaginative reconstruction of the John Henry story a profound and welcome acknowledgement of the unrecognized labors that went into building this country. (The Houston Chronicle)

A remarkable work of scholarship and a riveting story.... This slender book is many-layered. It's Nelson's story of piecing together the biography of the real John Henry, and rarely is the tale of hours logged in archives so interesting. It's the story of fatal racism in the postbellum South. And it's the story of work songs, songs that not only turned Henry into a folk hero but, in reminding workers to slow down or die, were a tool of resistance and protest. (Publishers Weekly (starred review))

Faster than a speeding drill. More powerful than a steam hammer. Able to leap generations in a single bound. It's a man (it's a legend)

Cultural history at its best, and part detective story, Steel Drivin' Man sings like John Henry's Hammer. What rings in these pages is the big-hearted, broken-hearted America of Walt Whitman, Maya Angelou, Woody Guthrie (and the real John Henry. Scott Nelson has busted a mystery and banged out a landmark.)

The ballad "John Henry" is the most recorded folk song in American history and John Henry--the mighty railroad man who could blast through rock faster than a steam drill--is a towering figure in our culture. But for over a century, no one knew who the original John Henry was--or even if there was a real John Henry. In Steel Drivin' Man, Scott Reynolds Nelson recounts the true story of the man behind the iconic American hero, telling the poignant tale of a young Virginia convict who died working on one of the most dangerous enterprises of the time, the first rail route through the Appalachian Mountains. Using census data, penitentiary reports, and railroad company reports, Nelson reveals how John Henry, victimized by Virginia's notorious Black Codes, was shipped to the infamous Richmond Penitentiary to become prisoner number 497, and was forced to labor on the mile-long Lewis Tunnel for the C&O railroad. Nelson even confirms the legendary contest between John Henry and the steam drill (there was indeed a steam drill used to dig the Lewis Tunnel and the convicts in fact drilled faster). Equally important, Nelson masterfully captures the life of the ballad of John Henry, tracing the song's evolution from the first printed score by blues legend W. C. Handy, to Carl Sandburg's use of the ballad to become the first "folk singer," to the upbeat version by Tennessee Ernie Ford. We see how the American Communist Party appropriated the image of John Henry as the idealized American worker, and even how John Henry became the precursor of such comic book super heroes as Superman or Captain America. Attractively illustrated with numerous images, Steel Drivin' Man offers a marvelous portrait of a beloved folk song--and a true American legend.